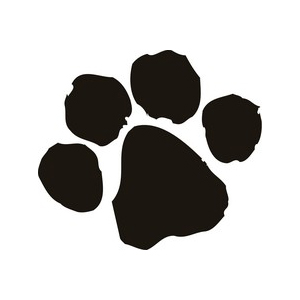 Before we bought Finisterra it was named "The Cat's Meow". The previous owner had proudly applied that name in eight inch tall letters on each side of the hull.  And just to make sure there was no mistaking the name of the boat, he had lots of cat's paws applied to the hull in strategic locations on the bow, around the name and across the transom. The boat looked like a big cat had walked up the bow, along the sides of the hull and across the transom before disappearing back into a surrealistic cat dream. It really did look like a cat lover's dream boat.  It only took me a couple of days of sitting in the sun with a heat gun and putty knife to get the name and all those cat prints off.

The dodger and bimini on The Cat's Meow were a faded shade of green and were at the end of their useful life when we bought the boat. I like the color green, and I like cats.  But I can't say I like green cats or green dodgers, so the day we bought her we knew we'd soon replace the green with new cadet gray canvas. The job is just about complete and we are quite pleased with it.


It's always an interesting experience to design a dodger for a boat. In this case, the stainless steel framework was already installed and was in good condition. The challenge was to use the existing frame to redesign the dodger so it meets our specific needs. I like to be able to see over the dodger from the helm and Lisa doesn't like to have to duck under it. Since I'm about seven inches taller than her I was able to adjust the height to accommodate us perfectly. This involved lowering it about three inches by cutting a little off the frames and adjusting the angles of them a bit.

I think most of the dodgers I see around my marina are too tall and clunky looking, which is surprising since virtually all dodgers are custom made. I am also of the opinion that most of the time, the person who designs the dodger gives little consideration to the aesthetic effect of the dodger on the overall look of the boat. I understand that their primary purpose is to provide protection from wind and spray but I'm not prepared to sacrifice style for the minimal added protection of a taller dodger. So, perfectionist that I am, I took dimensions and photographs and made CAD drawings of the whole thing superimposed on the profile of the boat and puttered around with it until I was satisfied with it. Then I adjusted the angles of the frames this way and that until I had it all just so. When all that was done, I passed this information on to Dan at Harbor Custom Canvas in Long Beach and he, being a master dodger builder, converted it into reality. We had them build the dodger on our last boat and found their workmanship and service to be excellent in all respects then, and they did another outstanding job on the Finisterra.

I chose Strataglass over vinyl because it doesn't wrinkle, it's very clear and it's durable. Strataglass is also flexible enough to allow for the roll-up center section, which is very valuable in the tropics. Notice that the corners of the glass are radiused instead of sharp. I like the look of this design better and as an engineer and designer, I have always associated sharp corners with stress risers.

Our boat came with a bimini mounted to the stern pulpits. The original was about four inches higher than the new one. My goals in lowering it were threefold.  A lower bimini is structurally more stable, presents less windage and is better looking. It actually provides more shade than the old one because it is about four inches longer and the low height helps put the shade where it's needed instead of off to one side or the other when the sun is at an angle instead of directly overhead, which is virtually all the time.

We had snaps fitted to the sides and back, and a zipper on the forward side. These are for side curtains and a filler piece that connects the dodger to the bimini and provides shade over the entire cockpit. The side curtains will be made of polypropylene mesh and will attach to the top rails of the pulpits and lifelines. The mesh is fairly see-through and lets the breeze pass through as well.


Notice that the bimini extends the full width of Finisterra's ample stern. The extra shade this provides becomes more important south of the Tropic of Cancer. It isn't visible in any of the photos but I had Dan weld a grab rail onto the aft side of the bimini similar to the one on the dodger. It's fairly handy as a grab rail, but it's the perfect place to put the solar panels. On our last boat I mounted them on the aft end of the bimini and made them adjustable so that I could angle them toward the sun. That's the next project I have planned for Finisterra.