During our last cruise in Mexico aboard our Beneteau 423, Finisterra we began thinking about going in a different direction in our next boat. We decided it would be fun to cruise the eastern seaboard of our own country. Florida, the ICW, the Chesapeake, Long Island sound and points beyond. We knew Finisterra, with its 7 foot draft, would not be happy in the ICW or the shallow waters of many of the places we would like to visit. So after returning home from Mexico we put the boat up for sale and in April of 2016 we sold it.

The next month we flew down to St. Thomas and joined friends for a cruise in the BVI's which culminated in a passage from there to Panama. During which time we thought long and hard about what our next boat should be. Given its mission, we decided it should be a power boat.

We wanted a boat of 30 feet or less, a single diesel engine for economy, a bow thruster for maneuvering in the confines of a marina, and decent accommodations for living aboard for a week or two. Of course the boat had to be good looking and not too expensive. We wanted a boat with good speed potential, but more importantly we wanted it to be seaworthy and capable of handling the rough conditions we could expect not just off various eastern capes, but in our home waters of southern California.

In October and November of 2016 we took a trip down the west coast of South America and through the straits of Magellan and if anything, that cruise drove home the point that seaworthiness should rank at the top of the priority list. Now, there are about a zillion choices for folks looking for a 30 foot powerboat, but it was interesting to see that when we compared our requirements with what was available, the choices narrowed down to a precious few.

I like the Bertram 31. It's fast and a good sea boat with decent accommodations for its size, but its twin engines ruled it out.

We also looked at the Mainship 30. It had the right powertrain and reasonable accommodations.
The Mainship's hull incorporates a long keel and almost no deadrise aft, which did not appeal to me.


We looked at dozens of other boats online and in person but didn't find what we really wanted until we came upon the Albin 28 Tournament Express.  It is powered by a single 315 hp turbocharged Yanmar diesel and a bow thruster is standard equipment.


The Albin 28 enjoys an excellent reputation for its seaworthiness and provides just enough accommodations to meet our needs. We will stay aboard short periods of 1 - 2 weeks at a time. 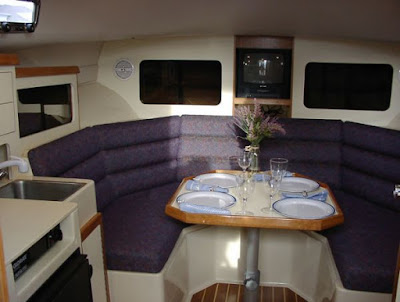 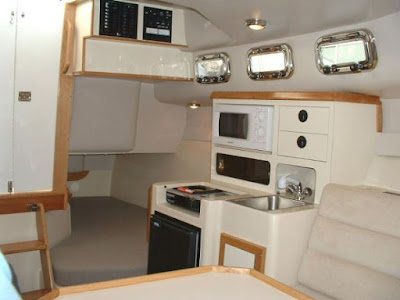 We found a 2005 flush deck model that had been lightly used and is in excellent condition. We are looking forward to spending the spring and summer of 2017 exploring the Chesapeake and points north.