Records fell in the 2017 Transpac race. It wasn't because this was a particularly windy race. It was because the boats that entered this year's race were faster than in previous years. Comanche, the 100 foot supermaxi set a new Transpac 24 hour record of 484.1 NM, which works out to an average speed of just over 20 knots. Comanche finished with an elapsed time of 5:01:55:26, beating the record set by Alfa Romeo in 2009 by over 12 hours.

We took our Albin 28, Compadre out to watch the start of the big boats, and Steve Crisafulli brought a camera. The photos below are all courtesy of him.


Just for fun I did some rudimentary calculations for Comanche based on published data and came up with a Sail Area/Displacement Ratio (SA/D) of 80.4 and Displacement/Length Ratio  (D/L) of 29.50. These numbers put the boat squarely in the "Sportboat" category. Aboard Compadre, we paced Comanche at a bit more than 13 knots as the big sloop headed for the West End in a light breeze.


The other supermaxi in the race was Rio 100, which claimed the Barn Door trophy as the fastest human-powered monohull in the race, with an elapsed time of 6:17:09:09, roughly 40 hours slower than Comanche. Rio struck a UFO (Unidentified floating Object) and had to make emergency repairs while underway and finished with only one rudder.

Fifteen years ago Merlin was brought into my shop for a refit. The boat had been rode hard and treated poorly for decades and was in bad shape. Her new owner, a rancher/business tycoon from Texas wanted to remake her into something of a luxury racer cruiser, which I thought could be a good thing for the boat. I drew a nice, low slung cabin trunk and recommended that he get rid of the canting keel which was pretty useless without a daggerboard. In the end the owner opted to keep the canting keel and wanted a cabin with full headroom for himself. He was a tall man, and wore cowboy boots and a Stetson whenever he visited my shop. So we raised the cabin trunk another six inches. We opened up the transom and redesigned the cockpit, and artist Gary Miltimore gave it a dazzling paint job. Merlin finished with an elapsed time of 8:02:34:09, making her the fastest boat in Division 2. 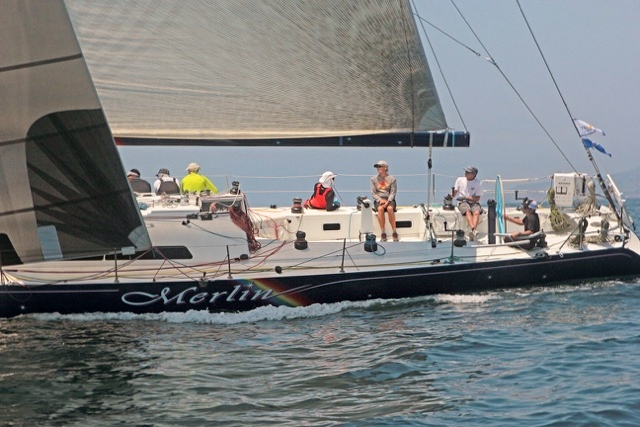 Medicine Man is another boat that has undergone a considerable amount of surgery. This Alan Andrews design started out as a 56 footer with tiller steering. Over the years the boat received a new bow, new stern, water ballast, and gained roughly seven feet of length in the process. 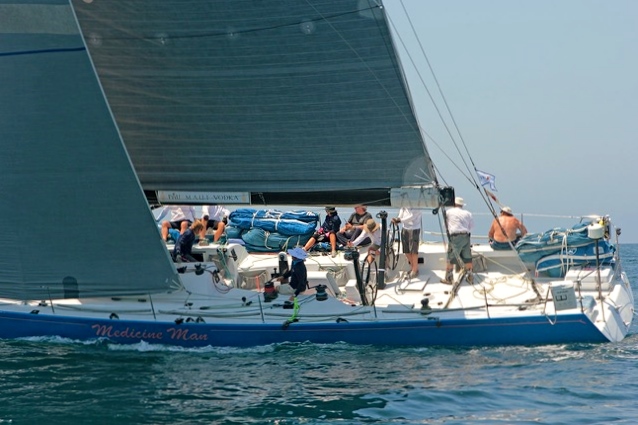 
Back on the home front, Compadre has been undergoing lots of repairs, modifications and upgrades. I'll post photos soon.
Posted by Leif at 2:02 PM No comments: