As you may know, Morris Yachts was recently acquired by the Hinckley Company. When I learned of the sale I thought it was another example of smaller boatbuilders in the US being swallowed up by the bigger ones. In  my opinion this is a necessary evolution, a sign of the changing economic times. It takes deep pockets to survive in this business, and this is true not just because boatbuilding is becoming more and more technology driven. These days environmental regulations demand expensive equipment and methods, the cost of industrial space continues to rise, qualified labor is both scarcer and more expensive, insurance costs are going up every year, and the list of challenges for boatbuilders continues on. So I was not surprised to see that Morris was taken over by a bigger and financially stronger company. In fact, you may recall that Hinckley itself was acquired a few years ago by Scout Partners, LLC an investment firm based in New York. It could be argued that absentee ownership of these companies does not bode well for the creativity and innovative drive of these companies, but I don't think that is necessarily so. It takes money to innovate, experiment and develop new products, and I think enlightened ownership that is dedicated to preserving and supporting companies like Hinckley and Morris can help them maintain the levels of excellence they have been known for. At least that's my hope.

I thought it would be fun to take a critical look at one of Morris's current products, the M29. This boat was designed by Sparkman & Stephens in 2008 and is the smallest of Morris's M line, which includes 36, 42 and 52 foot models. I have to say I'm partial to this baby sister of the bunch because in  my opinion, it comes closest to delivering the pure, undistilled essence of sailing pleasure.

Here are some numbers:

In studying the hull of the M29, notice that the waterline length is about 70% of the overall length. Those long overhangs in the bow and stern, combined with the narrow beam will give this boat a very easy motion in a seaway, but more importantly in a boat of this type, give it lovely proportions. It will not sail nearly as fast as a modern 29 footer with a plumb bow and wide transom, but it will sail more beautifully. And while speed is important, so is beauty.


The M29 looks like a classic yacht above the waterline, but below it has fairly racy features including a deep fin keel and carbon fiber spade rudder.  The mast is also made of carbon fiber, clear indications that Morris is taking performance seriously in this boat.

The deck is of classic proportions, with a short cabin trunk and graceful coamings around the generously proportioned cockpit. With such a small cabin trunk, a sliding companionway hatch becomes problematic.  There's just not enough room for it, so it has to be made removable. I've grappled with this problem on several of my smaller designs over the years. 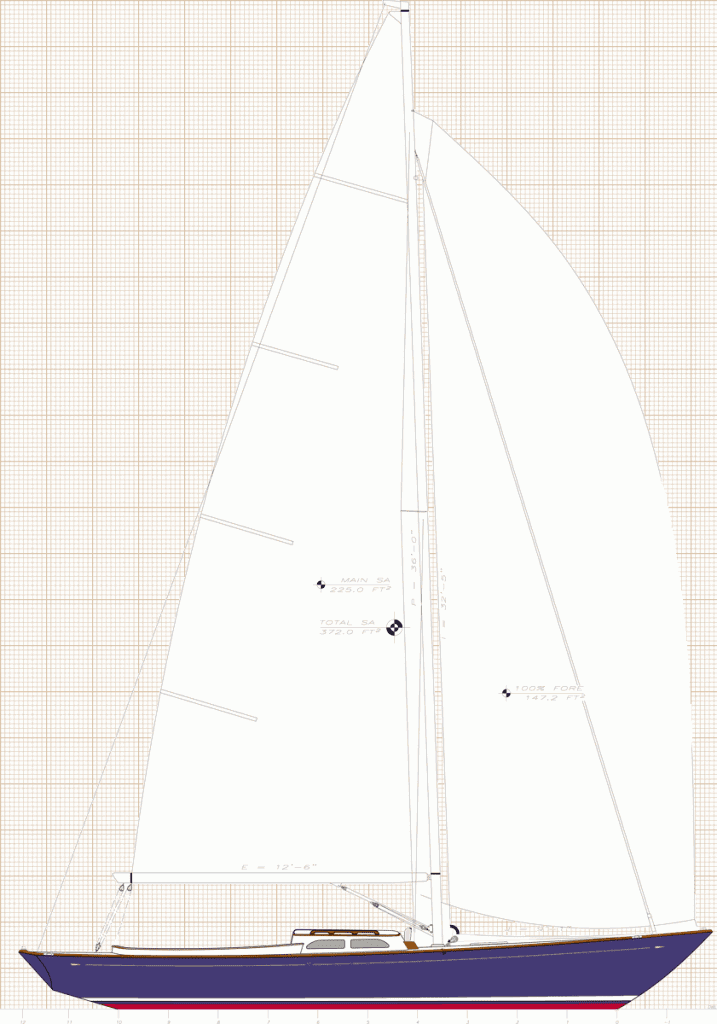 Morris has done away with winches on the M29, using 2:1 purchase on the main halyard and a block and tackle system for the jib sheets. This limits jibs to the small self tacking unit shown in the drawing above. This is probably a good trade-off, given the boat's very generous sail area. The jib sheet is led under the deck to a bank of cam cleats built into each cockpit coaming. I have not used this type of arrangement before so I can't attest to its efficiency, but it does make for a very clean deck layout.

Back in the 1970's, when I was in the early years of my career as a yacht designer, I was commissioned to design a similar boat and it was amusing to pull the old drawings out of my archives and compare them to the M29, The design brief was for a traditional sloop of 26 feet, to be built of cold-molded mahogany. The client wanted the boat to have classic lines but was not particularly concerned with what it might look like below the waterline. So I designed the boat with traditional looks and a fast underbody.


The Morris M29 has a basic accommodations plan that includes a pair of settee berths and a Porta-Potty, which is all that's necessary for this daysailer. I like the reliability of the inboard diesel.


Morris also offer an M29x version, which includes a bowsprit, deeper keel and more sail area. According to data I've seen, the model x is about 18 seconds per mile faster than the standard M29. This boat reminds me of 1969 Jaguar XKE roadster. It's exquisitely beautiful with plenty of horsepower straight out of the box. The extra deep keel and tall rig are a bit like replacing the Jaguar's beautiful 3.8 liter engine with a Chevy 327 V-8. It'll be faster but not quite as perfectly balanced as the original.

The M29 a wonderful example of classic design and very high quality execution. It's expensive, but what a sweet ride!