The first time I sailed on the Honcho I noticed that the transom was immersed as we motored out of the harbor, dragging a small wave along with it…. Not good. Later, under sail, even with the boat heeled ten degrees, there it was, a little wave following the transom around everywhere we went. That little wave was telling me that Honcho’s transom sucks.  I mean it sucks a little wave along behind it, squandering energy that could and should be used to make the boat go. For a yacht designer this simply won’t do.
﻿
﻿Later, another problem became apparent. There is a very stylish recess in the transom that serves as a step and a place to bolt on the boarding ladder. It’s very French.  That is to say that it looks good but, mon amie, it does not work so well. There is a nice recess for the ladder, but no place to put stuff or stand if the ladder is not deployed. Having an inconvenient boarding ladder is, well, inconvenient.  But having a transom that sucks, that's just wrong.
﻿﻿
So I decided to build a small transom extension that will do three things. First it will stop the transom suckage (an industry term). Second it will provide a place to put stuff and stand on when boarding the boat from the dinghy or just checking the transom, which I do periodically. Third, it will increase the sailing waterline length by about a foot.  As all students of yacht design know, the theoretical hull speed of any boat is 1.34 times the square root of its waterline length. I’ll save you the math, on the Honcho that translates to an increase of approximately one tenth of a knot in theoretical hull speed. Putting it another way, Honcho with the extension will go roughly two miles further than Honcho without the extension in a 24 hour run. Let’s face it, that’s not much….But, I’ll be a lot more relaxed over the next 10,000 miles, or however many we sail, whenever I look over the transom and see a nice, clean, non sucking wake behind us. After all, cruising is supposed to be relaxing, right?
﻿ ﻿﻿ ﻿﻿ ﻿
Over the next week or so, I’ll explain how to build a transom extension.
﻿﻿
﻿﻿

I think of Joshua Slocum as the first world cruiser. In 1895 he set out from Boston in an old wooden sloop that he rebuilt, and sailed solo around the world by way of Cape Horn, Torres Straits and Cape Agulhas. The Spray, as it had been named years before he owned it, had the following dimensions:

When the Spray left Boston in 1895 it had a 14' long bowsprit and a 34' boom, In South America Slocum shortened them to about 10’ and 25’ to make the boat easier to handle. Still, the fifty-something year old Slocum had to be fairly acrobatic to set, reef and douse its sails.  Another interesting fact is that the Spray had no cockpit for shelter at sea, no self steering gear and no winches. Everything aboard the Spray, including the anchor windlass, was ‘handraulic’. Slocum must have been the epitome of a sailor in every sense of the word to sail that boat single-handed around the world. Since his historic voyage, many people have circumnavigated the globe.

One thing Slocum wrote in his classic narrative of his voyage was that you need not be an expert sailor to circumnavigate, and that point has been emphatically driven home recently. I refer you to seventeen year old Zac Sunderland, who managed to stagger around the world in an old Islander 36, and the even younger Jessica Watson who accomplished a solo nonstop circumnavigation in a Sparkman & Stephens 34. One of the most interesting recent circumnavigations was that of Pat and Ali Schulte in their 35 foot catamaran. I highly recommend their lighthearted and amusing book about their travels. You can find it at www.bumfuzzle.com.

One of my favorite circumnavigators was Harry Pidgeon. Harry built his 34 foot Seagoer yawl on the beach in San Pedro, California. Harry was a rafter, a rambler, an accomplished photographer and a pretty good story teller too. His book, “Around the World Singlehanded: The Cruise of the ‘Islander’” is well worth searching for. I always admired the calm, confident way he set about building his boat and simply sailing over the horizon. You can find out more about this fascinating sailor at: http://captainharrypidgeon.org/

It’s interesting to note that all five of these circumnavigations were done in boats with an average length of about 35 feet, none of which was designed or built with such ambitious voyages in mind. Yet these fairly average people ranging in age from 16 to pretty old achieved these admirable goals without any serious problems.  You can find a list of notable circumnavigators at http://www.joshuaslocumsocietyintl.org/solo/solotable.htm
Posted by Leif at 5:38 PM No comments: 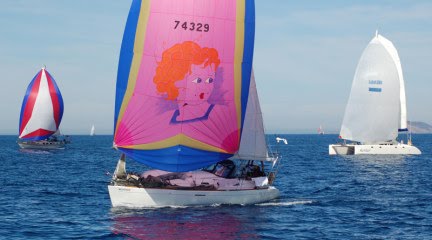 Congratulations to Rudy Heessels and crew on the completion of their Pacific voyage aboard Wind Child, his Beneteau 36s7. From their home port in Washington, they sailed down the coast to San Diego in time to participate in the 2009 Baja Haha. Then in the spring of this year they took off on the Pacific Puddle Jump to the Marquesas, then on to Tahiti, and finally returned to Sequim, Washington by way of Hawaii. You can read all about it on their blog: http://www.sailblogs.com/member/rpo/
Posted by Leif at 3:47 PM No comments:

Honcho as a Cruising Boat

Honcho is a Beneteau First 36s7 designed by the French firm of Berret/Racoupeau. Jean Berret had some very successful IOR designs back in the dark ages and eventually teamed up with Olivier Racoupeau to design production boats and BOC type racers in the 1990's. During that period they designed several boats for Beneteau. Today the B/R firm, sans Berret, still does a lot of work for Beneteau. The First 36s7 is typical of the work they did for Beneteau in the 1990's. The hull is beamy, wide in the stern and of moderate displacement. The proportions of this hull make it quite fast reaching and running, and tricky to sail fast upwind. For me, that's a nice compromise in a cruising boat. Here are some stats:


LOA: 34.50'
Bmax: 12.50'
Draft: 6.10'
Ballast: 3,650 lb
Disp: 11,684 lb (Honcho weighs about 12,500 in cruising trim)
SA: 605 sf (100%)
D/L: 173
SA/D: 18.8
Bal/Disp: .31
For you students of yacht design, the displacement/length ratio (D/L) is an indicator of the weight of the boat relative to its length. These days a D/L ratio of 173 is fairly conservative. You could say the same for the sail area/displacement ratio (SA/D). As old Josh Slocum once said, "The calculations are well and good, but how does she sail?" Well, as you would expect, the Honcho is a bit sticky in light air compared to a racer, but trundles along quite nicely in 12-18 knots true with a full main and #2 up. Point the boat downwind in a breeze with the big kite up and it's fun to sail. But I would say that this boat is happiest on a reach in 15 knots of wind.
The sailplan is excellent for a cruiser. The main is big, with efficient controls and the foretriangle is fairly small. This is an easy boat to balance and once you find the groove you can lock the wheel and boat will steer itself if you pay a little attention to the traveler. All the sail controls are handy and I've dialed in the block and tackle on the sheet, vang, traveler, outhaul, cunningham and backstay so that everything is easy.
I’ve made a few changes to the boat that are designed to make it more seaworthy or more comfortable:
The stemhead attachment gave me pause, but after thoroughly inspecting the boat from keelbolts to masthead crane, it appears to have been the only structurally deficient part of the boat that I could find.

Honcho is a Beneteau 36s7. All sailors have their own criteria by which they measure the ideal boat for their needs. For me, Honcho is about as good as it gets. My particular set of criteria is a combination of performance, comfort, construction, aesthetics and cost. When I balanced out these factors it turned out that only a select few boats would match up. I could have easily designed and built a custom boat that would be a whole lot better in terms of performance, comfort, looks and construction, but it would have cost roughly four times the price of the Honcho. On the other hand, I know of a lot of boats that would have excelled in one area or another, but fell down in some other important way. I'm not saying that there aren't other boats out there that would do just as well as the Honcho, but I have to say that this boat fits right in the middle of the sweet spot of my concept of a good small cruising boat. It's big enough but not too big. It’s engineered and built, for the most part, strongly enough to sail anywhere I would care to go. It'll easily put away 120 miles a day, and that's fast enough (just barely). As for aesthetics, that's a subjective judgment, one man's dreamboat is another man's blowfish. Finally, it fits the budget.