Last spring we joined friends in the BVI's for a week of cruising among the islands and then a passage to Panama aboard their beautiful Leopard 42, Salida. It's about a thousand miles from Tortola to the San Blas Islands over what is often a boisterous part of the Sea. We had an average of  twenty knots of wind on the port quarter for most of the passage but as we neared the Panamanian coast the wind left us and we motored the last twenty four hours, coming to anchor not far from Dog Island. We spent another week cruising among the San Blas Islands before heading home. It was a wonderful time with great friends aboard a handsome boat. Cruising doesn't get much better than that. 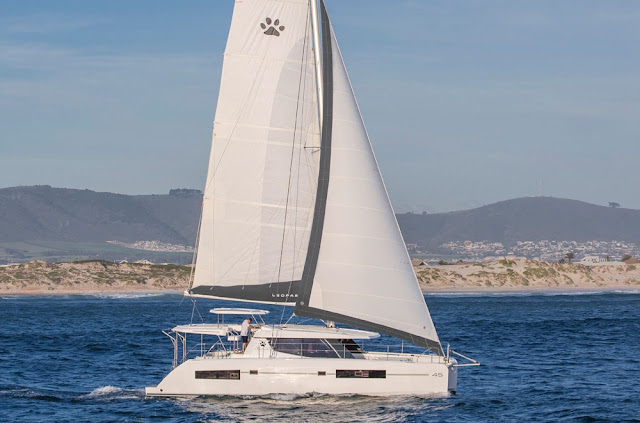 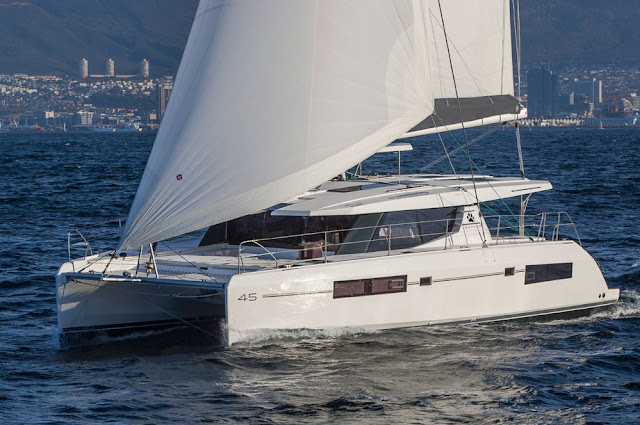 When I started looking at the new Leopard 45 the thought hit me that somewhere between the vintage 2003 Leopard 42 and the new 45, the Leopard line has evolved from sailboats to sailing condos. I am not saying this to be critical of the company or their products because there is nothing wrong with creating boats that provide truly luxurious accommodations along with less emphasis on the act of sailing them. In fact, I'm certain they have gone in this direction precisely because that's what their clients want. When I think of this evolution in those terms it's easy to understand why the new 45 looks the way it does.

Deisgned by the firm of Simonis Voogd,  the 45 incorporates hulls that, while fairly beamy at the deck level, are deep and relatively narrow below the waterline. The knuckle of the nearly vertical bow is well below the waterline and appears to be quite fine. The maximum depth of each hull is located at approximately station 6, or sixty percent of the waterline length aft from the bow and is about 36 or 37 inches below the waterline. In cross-section the hull appears to be semi-circular at this point, fairing into a nearly flat bottom at the transom. The keel adds another 24 inches of depth, for a total draft of 5'-1". That much draft is enough to keep this boat out of some nice anchorages, but is still manageable.

Above the waterline, there is a subtle chine that starts near the bow and fairs back into the hull near the transom. This adds visual interest to the boat's otherwise slab-sided appearance. The sheer has a slight reverse spring that terminates in a sloped transom. In studying the profile view below, it appears to me that the freeboard amidships is about 5'-6". This is a tall boat.

It looks like the forward part of the deck house is raked aft, but that is only along the sides of the house. Those angled features actually disguise the vertical forward face of the cabin, which allows for a spacious forward cockpit, which you can see in the deckplan below.

The deckplan shows the true purpose of the L45. It is designed to be a spacious home afloat with a front porch and a large patio aft. Both of these areas are protected from the sun by the large overhanging deckhouse roof. That forward cockpit will be a nice place to lounge when conditions permit, and the enormous aft cockpit, with seating for eight at the table, will be the social center of the boat.

One of the more striking features of the boat is the expanse of windows fore and aft, as well as port and starboard. Opening the sliding window and door in the aft end of the house converts the cockpit and salon to a vast open area. Open the door to the forward cockpit and you have plenty of flow-through ventilation and panoramic views from both cockpits and the salon. To me, this is more like a vacation home than a boat.

The galley is forward, on the starboard side of the deckhouse and incorporates substantial Corian counters, three burner cooktop, oven and a large single sink as well as a two-drawer refrigerator/freezer. I would prefer to have the sink located in the middle of the counter instead of next to the stove, but that's a minor issue.

Opposite the galley is a chart table. It's big enough, but I like to have my radios and master electrical panel nearby and I don't see dedicated spaces for them. Aside from that, there is plenty of natural light and visibility here. I like that you can sit at the chart table and have a great view looking forward.

The boat is offered in three and four cabin versions. Unless you are putting your L45 into charter service you would not consider four cabins. In the three cabin version, the starboard hull is dedicated entirely to the owners suite, with a king size bed aft, a huge head with shower forward and a plethora of storage spaces and a desk/dresser amidships. Again, this is more like a very comfortable vacation home than a boat.

The port hull incorporates fore and aft private staterooms, each with a separate bath. There is a V-berth in the bow, which will most likely be used for storage unless there are small kids aboard. There are large deadlights in the hulls, giving all of these spaces lots of natural light and visibility.

Notice that the bridge deck extends nearly to the ends of the boat. This adds considerable storage space. Housed in the forward bridge is the genset, freshwater tanks and plenty of space for ground tackle. There is just enough of a trampoline there to make a nice place to lounge when underway. I watched a video of the boat under sail and it appeared to be trimmed down by the bows a bit, so keeping extra weight out of this area would be important.

I saved the rig for last. It is a basic sloop with a square-top mainsail, roller furling jib tacked to the forward crossbeam and a furling screacher tacked to a short bowsprit. It's all of conservative proportions, which is in keeping with the cruising theme of this boat. The mainsail is controlled by a mainsheet bridle instead of a traveler and all the sail controls are led to the helm station, which is an elevated post on the starboard side of the boat.

Sailing this boat would be interesting. With the large hardtops fore and aft, and all the controls led to the helm station, the crew in the cockpit is going to be hard pressed to see the sails, let alone trim them. The helmsman will do all the sail trim by pushbutton from his perch. It doesn't appear that there are any sail controls in the cockpit. This means that sailing aboard the boat will be nothing short of idyllic for the crew, but it could get a bit busy for the helmsman at times.

I will leave it to you to judge the aesthetics of the new Leopard 45. The sharp angles and squared corners are certainly in vogue these days, but I miss the elegant curves and visual delight of more artfully designed boats. With that said, if I were in the market for a comfortable liveaboard cruiser, and not necessarily an offshore passagemaker, the Leopard 45 would be on my short list of boats to see.