Back in 2011 I was wandering around the docks in the marina in Nuevo Vallarta, Mexico, and came upon a Varianta 44. The thing was beautiful in a stark and business-like way, with pure white decks and minimal deck hardware set off by a tall carbon fiber rig. I didn't know it at the time, but I was destined to follow that boat, named Olas Lindas, around the buoys in a number of races over the next few years, much to my chagrin.

The Varianta 44 is built by Hanse Yachts and they have followed up on it with a 37 footer based on the same concept of a plain vanilla racer/cruiser with an excellent turn of speed. The idea behind these boats is an interesting one in that the hulls are actually from the molds of older  successful Hanse models. In the case of the 37, its predecessor is the Hanse 370, of which over 900 were built. The Varianta 37 incorporates a new deck design, all new interior and a more economical price tag. The result is a simple, sleek and Spartan cruiser/racer for the budget minded sailor.

The original Hanse 370 was designed by the Judel/Vrolijk design firm so I assume they are responsible for the conversion to the Varianta. The hull is a conventional shape and appears to be designed with IRC measurements in mind. With fairly high freeboard and minimal fore and aft overhangs the hull looks beefy. This look is accentuated by the skinny boot stripe and lack of a cove stripe. It's not particularly stylish, but it is economical, and stripes add nothing to performance. Below the waterline we find a standard T-bulb keel of 6'-4" draft. With much of the keel's 5,060 pounds located in the bulb, the V37 should be stiff and weatherly. One of the benefits of a bulb keel is that a boat can have a relatively low ballast/displacement ratio and still go upwind well. The V37's B/D is 33%. Of course, the downside of this type of keel is that it's prone to snagging kelp and other floating stuff. The rudder is a big spade that looks like it will steer the boat very efficiently. A rudder this size will also generate considerable lift to weather if the boat is well balanced.

In studying the deck drawing below, note that the bow is full-ish at the deck level, but the photos show a finer shape closer to the waterline. The fullness allows plenty of room to maneuver on deck without sacrificing the fine entry near the waterline. The stern is wide, but not nearly as wide as the latest 38 footers from the likes of Beneteau. There is plenty of flare in the aft sections and no chines. This is going to be a slippery and well behaved yacht in a seaway.

The cabin trunk is low and nicely proportioned in the profile view. It is wide and allows for just enough room to walk forward on the side decks. With non-overlapping headsails the chainplates are located at the sheer and jib tracks are mounted on the cabin top. The photos show the jib sheets led through a pair of rope clutches to the cabin top winches. My guess is that this arrangement won't last long. A better solution would be to mount the tracks alongside the cabin trunk and lead the sheets to the cockpit winches. You can easily rig up a set of barber haulers if you really want that jib in tight.

I like the way the cockpit coamings fair into the cabin trunk, accentuating the clean lines of the boat. The drawings show six winches, which would be necessary for serious racing, but the photos show just four, which is sufficient for cruising. The cockpit is large enough for shorthanded cruising, but will be snug for a racing crew. The deckplan shows a short mainsheet traveler mounted on the cockpit sole. It's short enough that it would not provide much better control than a single point for the mainsheet and I believe the production boats are leaving the factory with just the single point. Racers may find that annoying but you won't miss the traveler at all if you're cruising.


The sailplan of the V37 incorporates aluminum spars in a fractional rig. With a sail area/displacement ratio of 21.2 there is plenty of power for racing. The mainsheet is a simple six-part tackle led to a the end of the boom. For racing you'll want to rig up a coarse/fine trim system instead. The sailplan shows a masthead asymmetrical spinnaker with the tack located a couple of feet forward of the bow. I'm not sure if the plan is for a short bowsprit or some kind of pole arrangement for it, but I would vote for a bowsprit that also incorporates an anchor roller and chock. The combination of a nearly plumb bow and the bow roller shown in the photos pretty much guarantees that the anchor is going to bounce off the stem occasionally.

,
The accommodations plan for the V37 is fairly ordinary for a racer/cruiser. Twin double quarter berths are located aft, each fitted with a hanging locker and enough space to dress. The head is fairly large and the galley smallish but adequate for coastal cruising. A pair of 6'-8" long settees flank a dropleaf table in the salon. Outboard of the settees are cloth bins for storage. The forward cabin  incorporates a rather snug V-berth and a pair of lockers. There is just enough wood here to add a bit of style. My sense is that the layout is quite workable, while the styling is a bit stark for my taste. Of course we have to keep in mind that this boat is built to a strict budget, so plain white surfaces and square corners are understandable. 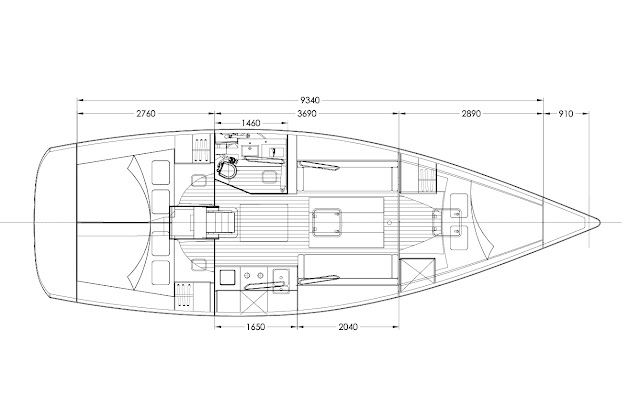 In the final analysis we have to decide whether this boat will meet the owner's objectives. If you're searching for a boat with an excellent design pedigree, good performance and reasonably good build quality at minimal cost, this boat should fill the bill quite nicely. Aside from those qualities, it's a very nice looking boat. Hanse just might be on to something with this type of econo-yacht.
Posted by Leif at 10:58 AM No comments: