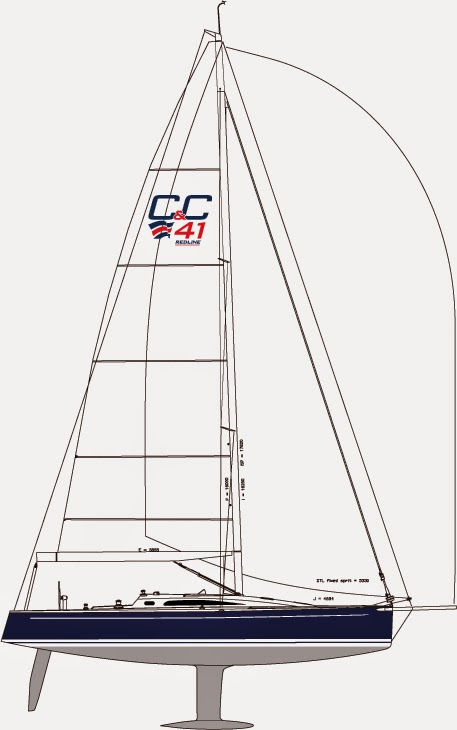 There has been no shortage of fanfare surrounding the launch of the new C&C Redline 41, and with good reason. This all-new design traces its commercial pedigree back to  the fabulous line of racing/cruising yachts designed by the legendary team of George Cuthbertson and George Cassian, The history of C&C Yachts is convoluted so I won't go into the details here, but you can read all about it on the Internet. Back then I was still a kid and a huge fan of C&C boats and thought they were all designed by the two Georges, but in fact much of the credit for the excellent design work belongs to Rob Ball and Rob Mazza as well as other talented designers that spent more or less time at C&C.

That was back in the heyday of yacht building in North America. By the mid 1990's the company had fallen on hard times and was taken over by Tartan Yachts, which produced a series of boats under the C&C name that were designed by Tim Jackett. Those were, in my opinion, okay boats but not quite in the same league as those designed by Ball, Mazza and the rest of early C&C design team.  In 2013 the C&C assets were acquired by US Watercraft, which is based in Warren, Rhode Island.

Finally, C&C, which suffered the same stormy weather as all the other sailboat builders in America over the last fifteen years, has found a favorable wind. It will be a surprise to me if C&C does not return to something akin to its former success. In addition to C&C, USW owns and manufactures the Alerion, True North and Carolina Cockpit brands as well as Waterline Systems. They are also a licensed builder of several J/Boat and Farr models. They have enlisted the venerable Barry Carroll to manage the C&C brand and Mark Mills to do the design work. It's hard to imagine a more capable gang to carry on the C&C name.

The Redline 41is intended as a racer/cruiser with the emphasis on IRC racer.  Here are some numbers:

I visited the C&C web site (www.c-cyachts.com) and found all of the photos for this article, including the beautiful wire frame drawing that gives us a pretty good understanding of the overall proportions of the boat. So beginning with the hull, we see a very clean shape with a narrow waterline beam and minimal wetted surface. Notice the slightly raked stem and the longish stern overhang. I like the raked stem for aesthetic reasons, and the long overhang aft provides reserve buoyancy when the boat is pressed, leaving a clean wake.  Notice the distribution of beam, it's been pulled in a bit at the transom and there is plenty of flare in the hull in that area. Up forward, the bow is fine, with just a bit of hollow in the waterlines, and the knuckle is placed just above the waterline . This is going to be a slippery and well behaved yacht on all points of sail.

The keel consists of a cast iron vertical fin mated to a lead bulb. The bulb is an inverted "U" shape in cross section. This helps get the center of gravity (CG) as low as possible but does generate more turbulence than a more symmetrical torpedo shape. I'm sure the Mills team analyzed this trade-off and decided that the benefit of the lower CG outweighs the cost of the higher turbulence.  The rudder is a deep, thin blade that should provide good control. With a displacement/length ratio of 152, the 41 isn't going to be a downwind planing machine but should surf along quite nicely on races such as the Transpac.


The cabin trunk is low and aerodynamically sculpted. It is relatively narrow amidships, leaving wide side decks and plenty of room to locate the jib tracks well inboard. Racers need tight sheeting angles. Notice that the forward end of the trunk is fairly wide, leaving very little side deck in this area. This was likely done to provide headroom in the head and forward cabin. The cockpit design is a nearly perfect for a racer/cruiser. The seats forward allow for headroom in the quarterberths and offer some comfort for the crew. The mainsheet traveler is located on the cockpit sole, with the sheet led to a pair of winches at the aft end of the seats, Admirals cup style. The photos show a recess in the open transom and I noticed in one of the renderings on the web site that they were at least thinking about a fold-down panel there that would serve as a swim/boarding platform. I don't think it's necessary for cruising since the recess provides enough of a step that boarding from a dinghy wouldn't be a problem.

The rig is pure raceboat. The mast and boom are carbon and so is the retractable bow pole. The chainplates are out at the rails so jibs are limited to about 105%. The boat has inboard and outboard jib tracks and barber haulers. This will allow the trimmer to dial the jib in perfectly. There is apparently an option for a short permanent bowsprit in lieu of the retractable pole. That would be a nice place to mount the anchor and roller, but since there is no provision for an anchor locker or windlass there's no point in trading the pole for the sprit.

Going below, the accommodations are exactly what I would expect from the builders of the Alerion, a tasteful blend of white surfaces and wood accents. You might wonder what all that wood is doing in a boat like this. It certainly harks back to the days of true racer cruisers that C&C once built. The layout is functional for racing and offers just enough comfort for coastal cruising. The V-berth looks small, a perfect place for the kids. The head is minimal for a racer/cruiser and is located forward of the main bulkhead with access from the forward cabin. This isn't a perfect arrangement but is acceptable, in my opinion, because the Redline 41 is a racing yacht with cruising amenities rather than a cruising yacht racing capabilities.


The Redline 41 is going to be a fast and fun boat to sail. As for cruising, it's easy to envision spending a week at the island, on a mooring. People passing by will inevitably slow down and admire it, ask what she is and comment on what a beautiful boat she is. It's harder to envision this boat spending a month cruising in more remote areas where good ground tackle, sun protection and shallower draft are important. It's a racing yacht that can be cruised. As I mentioned earlier, I will be surprised if this boat isn't a huge success and a worthy successor to the legendary boats that C&C produced in its heyday.

Getting Ready to Head South 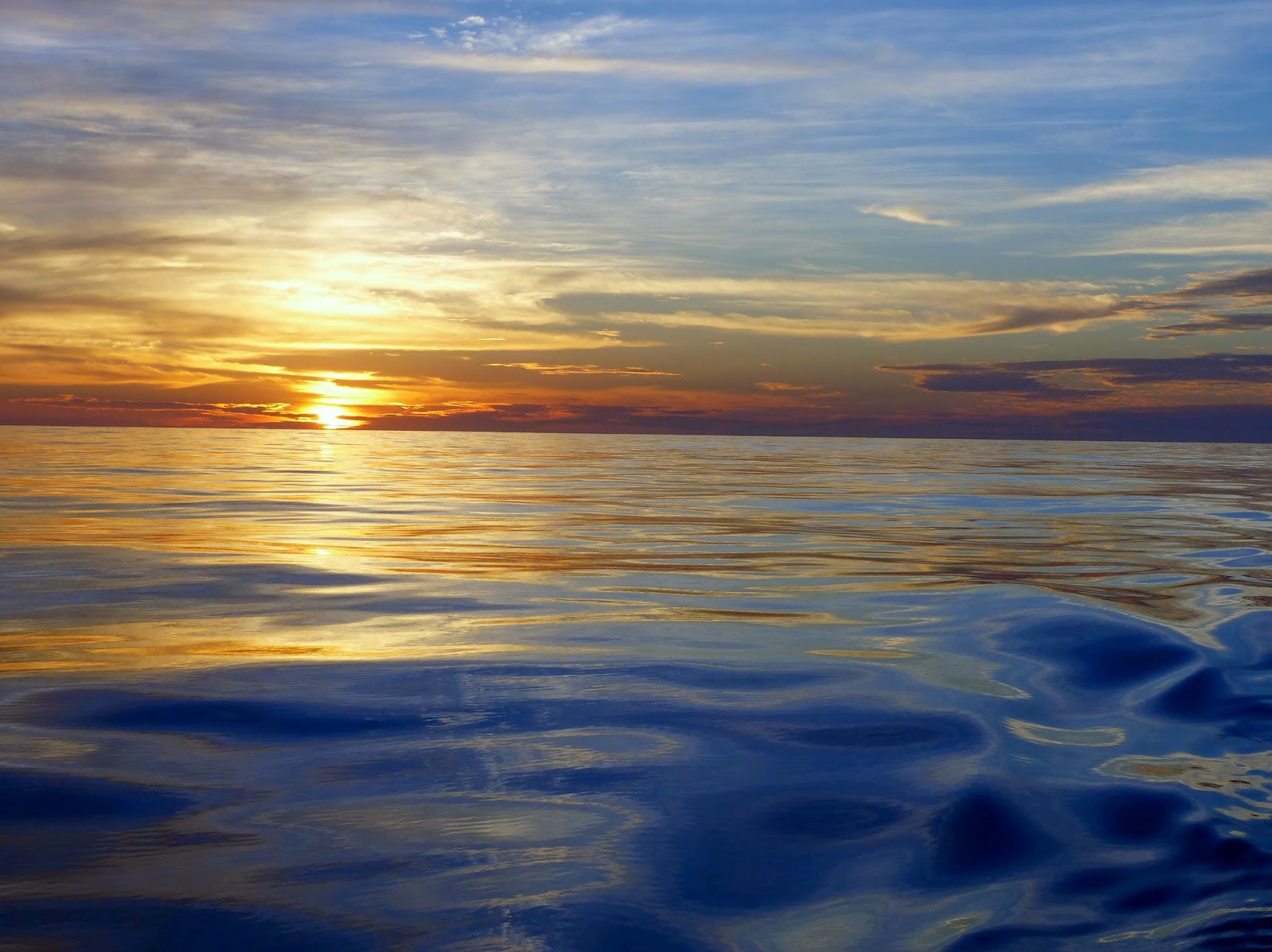 Finisterra has been in her slip for the last four months undergoing some refits, improvements and upgrades in preparation for her next adventure. Here is a partial list of work done:
- 10 coats of varnish on the cap rails
- Replace the worn teak in the cockpit with synthetic teak
- Add a fourth element to the lazyjacks
- Rebuild the watermaker
- Replace the jib sheets and main halyard
- Service the ground tackle
- Install fans in all the cabins
- Modify the outboard motor hoist to make it smaller and lighter
- Install a cut-out switch between the solar panels and charge controller
- Upgrade the bimini
- Fabricate and install a new cockpit table
- Replace the XM radio antenna
- Replace all docklines
- Install spreader patches on the mainsail
- Service the diesel engine and outboard motor
- Seal the joint between the galley countertop and lockers
- Completely empty the boat and clean out all lockers
- Refresh ditch bag
- Get new bug screens for all hatches

Whew! That was a lot of work. Now all that's left is to provision, fuel up and take care of roughly a thousand other minor tasks, such as refill the propane tanks, re-certify all the safety gear, go through our wardrobes and thin them down for the tropics, install an Iridium Go satellite communications system, stock up on spare parts and tools, make copies of documentation, etc. etc.  A few of my landlocked friends tell me I'm "Livin' the dream", but what they don't understand is that living the dream is a lot of work!

Anyway, it looks like, barring any surprises, Finisterra will be ready to sail sometime in early November. The plan is to spend a few days at Catalina Island, another week or so in San Diego and then head for Ensenada. From there we'll sail down the coast of Baja California, stopping in Turtle Bay and possibly Magdalena Bay before rounding Cabo San Lucas and laying over a day or two in San Jose Del Cabo to top up provisions. From San Jose, the plan is to cross the Sea of Cortez to Mazatlan, then cruise down the coast to Puerto Vallarta where we'll spend a month or so and plan our next move. 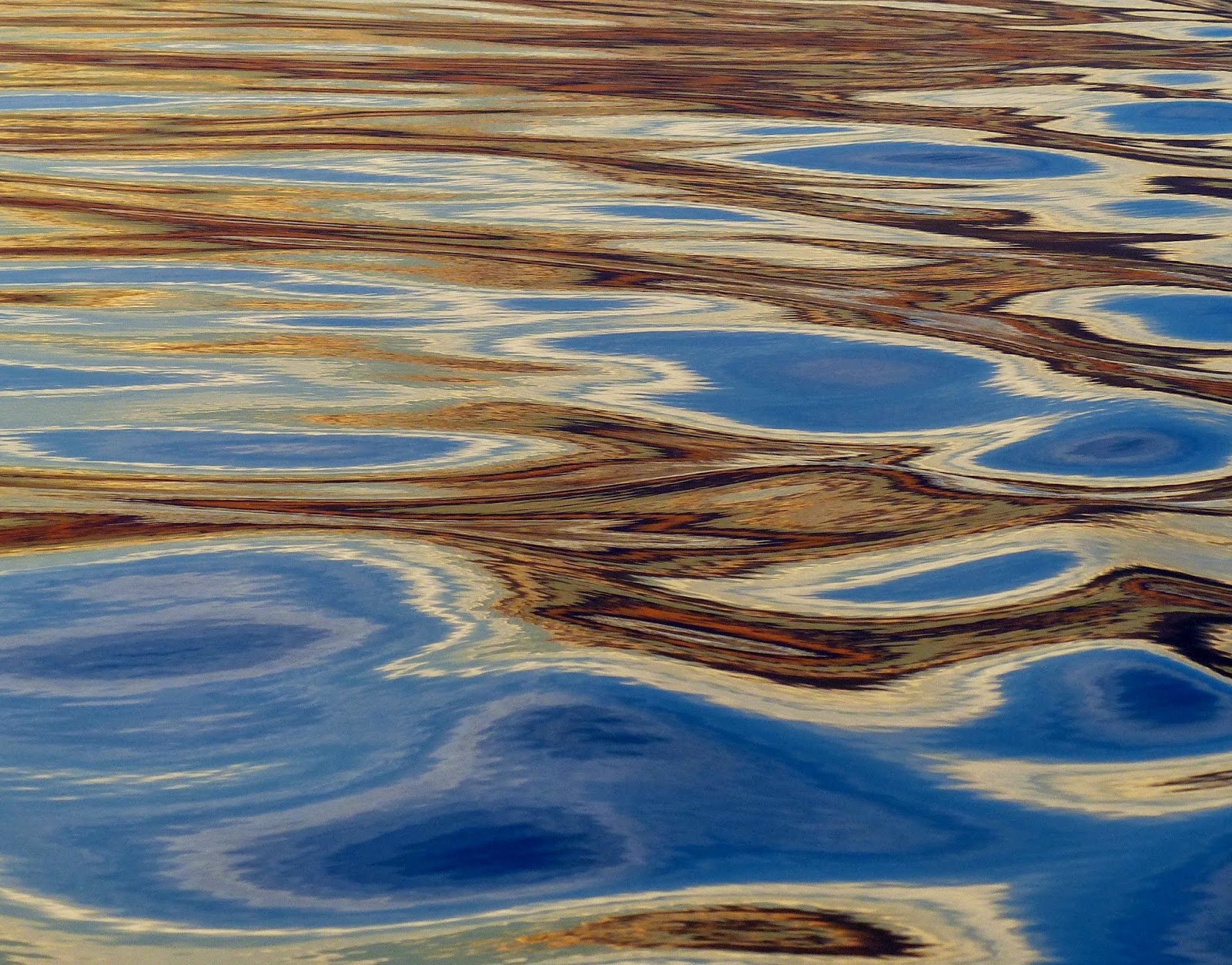