Note that some dimensions and ratios for the X6 are estimates based on the published data for the Xp and Xc.  Sail area and SA/D are somewhat inflated because I did not have actual rig measurements, but used published data from X-Yachts instead. Still, this table provides a snapshot of the performance potential of each boat relative to its siblings.

Comparing D/L ratios, notice that they are nearly the same for the X6 and Xp at 145 and 142, while the Xc weighs in at 182. The X6 and Xp will be able to surf when conditions are right, while the Xc will require relatively more energy to break free of its bow and stern waves and surf.

Most notable in these numbers is that all three boats have large rigs for their size and type. The Xp has a higher SA/D ratio than the X6, which is appropriate for the more racing oriented boat. The surprise here is that the cruising oriented Xc also has quite a powerful rig. We can think of the SA/D as power/weight ratio. A boat with a high SA/D is like a lightweight car with a big motor.

I included profiles of each boat below so you can visually compare them. The fairbody line of the Xc is significantly deeper than the other two boats, indicating a more V-shaped hull and more deadrise than the others. This shape gives the boat more comfortable motion in a seaway and allows heavy items such as tanks and the engine to be mounted below the cabin sole. Interestingly, the Xc has a higher ballast/displacement ratio than the others.


The underwater profile of the X6 is similar to that of the Xp, but notice that it is beamier relative to its length. Another interesting difference is that the aft overhang is longer on the Xp. All of this implies that the Xp will be the faster boat in light air, but only by a little bit. I think the X6 will be faster upwind in anything more than light air. With its long waterline and powerful rig, the X6 will be significantly faster on a reach.

We are fortunate to have a lines plan for the X6. In studying it, the first thing you'll notice is that the hull is V-shaped to about station 7, then it becomes "U" shaped from that point to the stern. The hull is nearly flat-bottomed near the transom, which is not overly wide. Above the waterline there is little change in the angle of the topsides, this is apparent in the body plan. That consistent angle gives the hull a somewhat slab-sided appearance, but it is a very efficient shape. I'm glad to see that the design team didn't succumb to the temptation to add chines, which on a boat like this would be nothing but a styling gimmick.

The X6 is equipped with a vertical fin-and-bulb keel with three draft options. The shoal draft version draws 8.50 feet and the competition keel draws 11.15 feet. There are twin rudders, which ordinarily I would be critical of.  But the reason for that arrangement is to allow space for a dinghy garage. In the Xp-55, the dinghy must be wrestled aboard and stowed athwartships because the rudder post is in the way. The twin rudders on the X6 allow the dinghy to be hauled aboard and stowed all in one go, a more practical system by far.

If I could afford my own X6 I would sit down with Niels and ask about a lifting keel. Nothing beats a deep keel for sailing performance, but there are lots of destinations that are too shallow for even the shoal draft version. I think a variable draft keel of six to ten feet would give me the performance I would demand it a boat like this, and access to some of my favorite coves as well.

The standard rig is aluminum and an optional carbon fiber rig is offered. Of course the winches are all electric. The mainsheet is led to a pair of blocks on the arch instead of to a traveler. For a luxury cruiser like the X6 that is a perfectly acceptable arrangement. The boat is equipped with a transverse jib track just forward of the mast that accommodates a self tacking 96% jib as well as longitudinal tracks for the 106% jib. There are no genoas on the X6.

The cockpit is large and well set up for cruising. The companionway is offset to starboard and the table is large enough for six to dine. The winches are located just forward of the helms. The controls and instruments are located on the consoles at the helms.

There are plenty of choices in the accommodations.  I think the centerline V-berth is more convenient than the pullman type owner's stateroom. The galley, as you would expect, is large and well laid out. Guests can be accommodated in the quarter-cabins. The boat can  easily accommodate three couples. 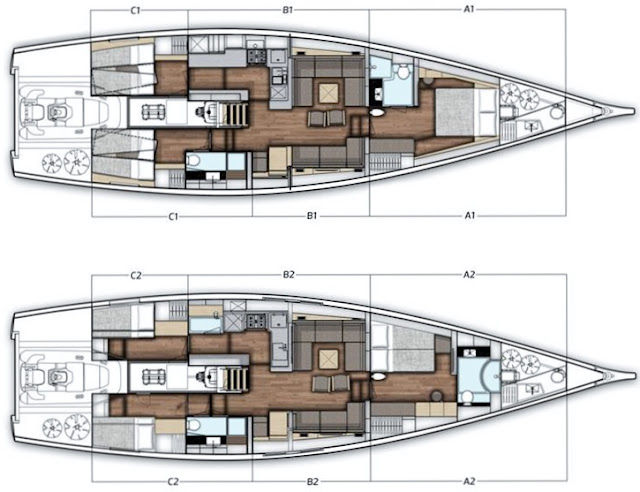 Visually, with it's truncated cabin and expansive foredeck, the new boat is a departure from previous production X yachts. This may be an incremental step in the design evolution of X-Yachts, or it may be an indicator of a changing of the guard at the company. Either way, the X6 is a stunning addition to their product line and I can't wait to see the new X4.