The GTS43 was designed by Jason Ker and is intended as a racer/cruiser. It's pretty clear that by racer/cruiser they mean racer that has enough amenities below to accommodate the family for an occasional weekend cruise. But make no mistake, this boat is really all about performance. It caught my eye because the designer and builder have collaborated to create a unique and distinctive yacht that I think is going to attract a lot of attention among those who need a few amenities in their race boats.


Jason Ker is not a household name in the USA but over the last twenty years this British designer has built an enviable reputation with his IRC racing yachts. The builder, originally based in Australia, has contracted with AD Boats in Split, Croatia to produce the GTS43 as well as the new GTS37. As you may know, this company also builds the Salona line of yachts. AD is owned by the Prevent Group, a multinational manufacturing corporation based in Wolfsberg, Germany that serves a variety of commercial and industrial markets. I think this is a business structure that we will see more of in the future. Yacht building has become so technology driven and capital intensive that for all practical purposes, the small independent boat builders are finding it harder and harder to survive.

The GTS43 represents a very different approach to hull design than more conventional racer/cruisers such as the Beneteau First or Elan lines. In the plan view it looks similar to other IRC inspired racer/cruisers, with a fine bow and wide stern. The same can be said of the boat in the profile view. But where those boats have full, or chined stern sections, the 43 has radically flaired sections aft.


Why, you might ask, has Ker designed this boat with a stern that is so different from the more conventional Beneteau and Elan, or most other IRC racers. I think the answer may lie with his interpretation of the IRC rating system, or he may simply like the looks of this stern. I don't have a lines plan for this hull but we can make some judgments based on the photos. Let's deal with the stern first. The hull near the waterline is actually relatively narrow by today's standards so there is not a lot of reserve buoyancy there. This, combined with the somewhat slab sided midship sections of the hull leads me to think this boat may have a lower prismatic coefficient than a typical IRC racer. This means the boat will not require a lot of horsepower to get up to speed, but is likely to generate a bigger stern wave, which we refer to as induced drag as it moves through the water at hull speed. One benefit of the very wide stern is that the crew weight can be placed well outboard and aft, where it does the most good in heavy air. Here are some statistics:
LOA: 43 feet
Beam: 13.78 feet
Draft: 9.02 feet
Displacement: 15,320 pounds
Sail area (IJ+PE): 1,029 sq. ft.
Disp/Length: 86.0
SA/D: 26.8


The high SA/D and low D/L indicate a powerful sailing machine that will demand a good helmsman and solid crew work when the breeze is up, but in return it will deliver stellar performance. Of course when it's just you and the wife out for a sail, you may want to tuck in a reef and put the small jib up, which is a small compromise for such a high performance boat.

The cabin trunk is an interesting blister shape, with the aft ends of the cabin fairing into the wide cockpit coamings. The seats are tucked behind the cabin trunk, leaving lots of room in the aft half of the cockpit for working crew. The twin helms are located well aft, but it looks like there is enough space there for the helmsman and tactician.  The mainsheet traveler is located on the cockpit sole just forward of the helms, with the mainsheet winches within easy reach. This is another boat with an Admirals cup type mainsheet arrangement.

The rig incorporates a carbon fiber two spreader mast.  The mainsail luff length is about 60 feet and the foot is 19 feet. This is a big sail that will require some muscle to handle.  The jibs are non overlapping so tacking will actually be fairly easy. Notice the long, fixed bowsprit. It does not include an anchor roller so you may want to ask them to work on that when you place your order for a new GTS43.

I don't have any drawings or photos of the underbody of the boat, but Ker states that the keel incorporates a thin fin and bulb. My guess is that the rudder is also thin, deep and very efficient.

This boat has reasonably livable accommodations that would make cruising for a week or so tolerable for the family. The forward end of the boat has a snug v-berth which might be a good place for kids.
The dinette in the salon is smallish and offset well to port and the settee opposite is also situated well outboard. This leaves plenty of room amidships for packing chutes, which is important on a boat of this type. There are provisions for pilot berths above the dinette and settee. The nav station is large and has lots of storage space. The galley, opposite the nav station, is small for a 43 foot cruising yacht, but almost luxurious compared to the typical race-boat galley. There is a pair of private quarter cabins aft, each with a hanging locker and a pilot berth. Overall, while this is not what I would call a pretty interior, it is very functional. I could imagine spending a week or so aboard. 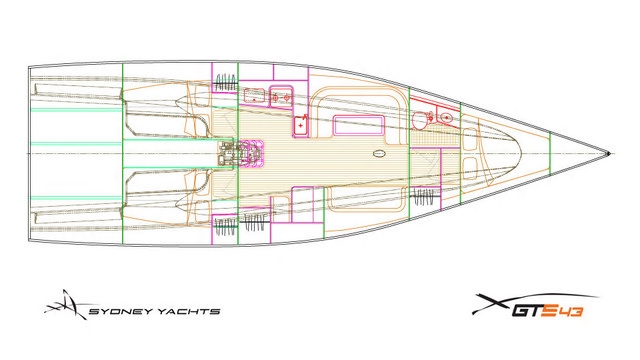 It seems to me that the racing world is becoming more separate from cruising.  These days there are many forty foot daysailers on the market that make no pretense of being cruise-able.  This was almost unheard of twenty years ago. I give Sydney Yachts credit for attempting to bridge that gap and producing a racer that can be cruised even if it's just for a week at the island. For more information about the GTS43 visit Sydneyyachts.com