I spent some time working on the boat last week, mostly routine maintenance items, but also on the new cockpit table, which is coming along nicely. I'll post some photos in the next day or two. Anyway, after a couple of hours of work on a particularly beautiful afternoon we decided to have lunch at Tequila Jack's,  which is about a ten minute walk from the boat. While sitting in the patio of the place, dining on fish tacos and  ice cold Pacificos, we noticed that "Transpac Village" was beginning to fill up with boats that are doing the upcoming Transpac Race, so we decided to wander over and have a look at the latest developments. It turned out to be an interesting stroll, with an extraordinary variety of boats in the marina, all in different states of readiness. They ranged from the venerable old Sparkman and Stephens designed "Dorade" to the ultra quick ORMA trimaran, "LendingClub", with lots of interesting boats between these two ends of the racing spectrum. While the boats we observed were just a small fraction of the fleet, it was interesting to see all the variety and to get a really nice perspective on the evolution of racing yacht design over the last 80 years. 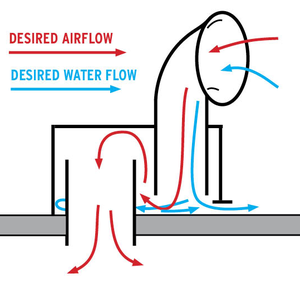 Here is a diagram of a Dorade Box. These days most people don't know why cowl vents are mounted on boxes. Air and spray, and sometimes green water, enter the cowl vent. The water drains away through scuppers in the box and the air is drawn into the boat.


On the next gangway we spotted the Santa Cruz 50, "Chasch Mer". This boat is hull number one of the famous "Cruz 50's". Her narrow beam, "V" shaped hull sections, and ultra light weight (for her era) are the embodiment of her designer,  Bill Lee's mantra of "Fast is Fun". While far off the pace of more recent 50 foot designs, Chasch Mer will provide her crew with an exciting, if Spartan ride to Honolulu.

Further down the gangway we spotted a beautifully maintained Santa Cruz 52. This boat does not share the same design pedigree as the 50's and 70's. It was designed by Bob Smith and is offers similar performance to the Cruz 50, but with very civilized accommodations. The Santa Cruz 52 is a classic.


The next three boats are all variations on the Transpac 52 theme, with an IRC twist. Meanie is the ex Vela Veloce, which was built for the late Dick Oland in 2009. Officially, it is a Southern Cross 52, not a TP52. The most visible difference between the two is the requirement for more accommodations and comfort in the SC 52. Do not be fooled by the concessions to cruising comfort, this boat is extremely quick and I doubt that you'll get your mother in law to do the runners.

Next to Meanie on the gangway was the Humphreys 54, Bengal 7. Launched in 2010 as Oystercatcher XXVIII, this yacht can easily be mistaken for a TP52. Bengal 7 is now owned by Yoshi Murase and handled by an all Japanese crew.

I would call Bengal 7 a pure IRC boat. With its hydraulic keel lifting machinery and slightly more accommodating interior, it is a bit heavier for its length than a state of the art TP 52. You can see a definite evolution in the design of the cockpit, compared to the slightly older Meanie, and truly vast differences from all out racers of yesteryear such as the Santa Cruz 50.

Beecom was tied up on the same dock as Meanie and Bengal 7 so it gave us a unique view of recent trends in race boat design. Beecom was launched in 2011 and is a true Transpac 52. This development class has evolved quickly over the last decade and I get the sense that it is stabilizing a bit, so this boat provides a fairly up to date perspective of the class. Unfortunately I had only my I-phone with me the day I took these photos so they are not as crisp as I would have liked. But if you look closely you can see the chine in the hull that runs from about station 3 to the transom.

This boat was designed by Rolf Vrolijk and built by McConaghy. I am particularly impressed by the clean lines and simplicity of design here. You can also see in this photo above the pronounced chine. If you're a regular reader of this blog, you know I've been mildly critical of racer/cruisers with chines. Well, here is a case where they really do make a difference. Once cracked off, this boat will almost always travel at more than its displacement hull speed.

Notice the hull shape at the sheer. It fairs from a fine bow to virtually straight sides aft. High performance sailboat hulls are beginning to look a bit like powerboat hulls. I liked this boat best of all the ones we saw in the Transpac Village that day.