Well, the transom extension is finished.  It took longer to complete than I expected. This was due mostly to weather.  Since starting the project we’ve seen weather records here in Long Beach matched or beaten in September and October.  In late September we had a heat wave in which the temperature reached 111 degrees. Then in October everything changed and between the first and 23rd, we’ve had ten days of rain. This kind of weather is not conducive to doing fiberglass work outdoors.  In spite of all that, the thing is done and the boat is just about ready to head south. 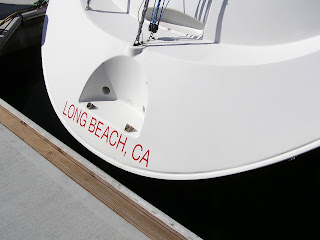 Okay, back to the process of building the extension. Step one was to take photos and dimensions of the existing transom geometry. This enabled me to develop the basic design and dimensions of the extension in the computer. Then I moved all the movable weight in the boat as far forward as possible to get the bow down and the stern up. This brought the bottom of the transom up a couple of inches…not nearly enough, so I put a couple of plastic trash barrels on the bow and filled them with water.  This added another roughly 500 pounds on the bow, bringing it down a total of about seven inches.  You would think that seven inches down in the bow would result in the stern going up a roughly equal distance.  This is not the case on the Honcho.  On this boat, the stern rises only about three and a half inches. The reason for this is that the longitudinal center of buoyancy, what you might call the flotational pivot point, of the boat is located aft of amidships.  This is not so good for working on the transom while lying on the dock, but it helps the motion of the boat underway.
After getting the boat situated in the slip the real work began.  I mocked up the basic shape of the extension with bits of wood, poster board and hotmelt glue to confirm the design. Using the mockup, I made a few minor changes to the CAD file and then produced working drawings of the mold that I would build onto the transom. This, and all subsequent work was done either lying or sitting on the dock and working on a part that was six or eight inches below that level.
With the mold in place I glassed in the lower part of the extension, which would be a faired extension of the hull bottom. If I was doing this in the comfort of a shop I would have vacuum infused all the glass parts, but on a boat floating in a slip there was no way I’d be able to get a workable vacuum bag on it. So I did it the old fashioned way with a bucket, brush and roller.  When this part was cured, it was time to build the upper deck of the extension.  Using half inch marine plywood, I shaped a deck piece so it fitted perfectly onto the lower part. I applied a layer of chopped strand mat to the underside of it and tacked it in place with Duraglas. The next step was to apply layers of mat and cloth to the top and fair it to the transom. A couple of coats of gelcoat were sprayed on using a little Preval sprayer. Then I created a pattern for the nonskid and rolled on thickened gelcoat.  The last step was to bolt on the boarding ladder and go out for a sail. Total cost for the extension, not counting the ladder was about $200 in materials and 40 hours of labor.
Posted by Leif at 11:34 AM