The days are rolling by ever so quickly and we have many miles to go, and many places to see before we say adios to Mexico. So we have hurried along on our voyage, reaching Bahia de Concepcion on May 17th. Our route from San Evaristo took us to Bahia Agua Verde for a night, then to Puerto Escondido for a couple of days. From there we went to Caleta San Juanico, where we anchored again for just a night.  We then anchored in Bahia de Concepcion in a small cove between Playa Santispac and Posada Concepcion.

At Puerto Escondido there is a large and very well protected lagoon with at least a hundred moorings, a fuel dock, tienda and other amenities including internet access, which is rare in this part of the world. We took advantage of all of these as well as the fine restaurant there.
After a couple of days at Puerto Escondido, we continued north another forty miles to Caleta San Juanico. Arriving there around 1600, we got the hook down in about 30 feet of water and had a nice swim before dinner. At roughly 26 degrees north latitude, San Juanico is far enough north that there is a bit of coolness in the air in the evenings, which is a refreshing change from the dry heat of La Paz.
Our next destination, Playa Santispac, about 55 miles from San Juanico, is located inside of the large Bahia de Concepcion. The Honcho got an early start, motorsailing into a building breeze. By noon the wind and seas had built to the point where we were getting spray over the dodger, with the promise of more to come as we approached Punta de Concepcion, which lies at the entrance to the bay.  Fortunately our course was northwest and the wind and seas were from NNE, so we weren’t too uncomfortable as we worked up the coast.  Around 1600, just as we cleared Punta Concepcion, the reel lit up and we caught a nice 6 pound yellowtail, which we’ll barbecue for dinner.
Bahia de Concepcion is open to the north, so after clearing the entrance the Honcho bore off and had a quick downwind run in 20 knots of wind toward Playa Santispac. As we approached Santispac we could see the north wind raking through the anchorage so we continued a bit further to a small cove just east of Posada de Conception and dropped the anchor in 20 feet of water, about 60 yards from shore.  With steep hills to our north coming right down to the water’s edge, we are well protected from the wind.

Bahia de Concepcion is about 20 miles long and roughly 4 miles wide. It is dotted with many small islands and is home to a wide range of birds and marine life.  After a nice dinner ashore and a good night’s rest, we were up early the next morning, cleaning accumulated salt off the boat and rigging. Suddenly we were distracted by a slight commotion in the water and discovered a couple of whale sharks lazily feeding next to the boat. We watched and photographed them for a while then donned mask and fins and joined them for a swim. Whale sharks feed on plankton and other small sea life and don’t pose a predatory threat to humans.  We dove under water and could see the massive fins and gaping mouths of these animals as they passed by close enough to touch. Predatory or not, swimming that close to such a large animal was exciting! 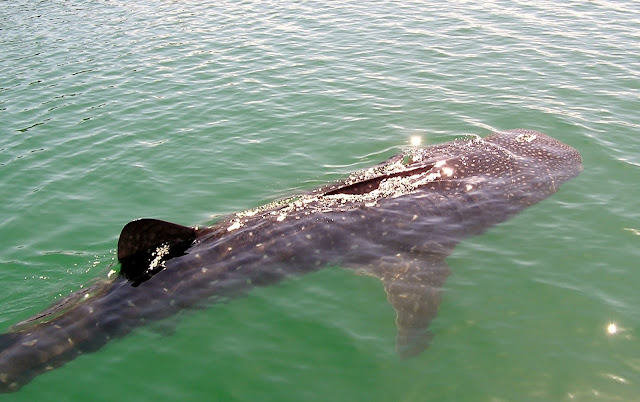 Playa Santispac is pretty much the boonies and there are no services here…no taxis, internet, cell phones, or gas stations. In need of diesel fuel, we took a couple of jerry cans and wandered up the beach, trusting that somehow we’d find a way to get to the nearest gas station, thirteen miles up the road. Sure enough, before long we’d hitched a ride on an old beat up water truck that took us all the way to the Hotel Serenidad where we had a fine lunch of fish tacos, guacamole and ice cold beer. We then got the fuel and a ride back to the beach in Santispac, where we’d left our dinghy. From there it was a short mile back to the boat.
The next day we were again visited by the whale sharks, but didn’t swim with them as we had plans to visit the town of Mulege, where we spent most of the day touring this flood ravaged town and socializing. Mulege suffered a direct hit by Hurricane Jimena a couple of years ago. Much of the town was damaged or destroyed by the storm, which caused the Rio Mulege to overflow its banks, washing a good portion of the town into the sea. There are still many signs of destruction in this pleasant little village.
Bahia de Concepcion is as far north as we will get on this voyage. So when we weighed anchor Saturday morning, May 21st, we were southbound, headed back toward San Juanico, where we spent a couple of days.  It was a delightful sail during which we were able to fly the spinnaker for a few miles before the wind shifted to the southeast and we were forced to set the trusty jib for the last twenty miles.  Along the way we caught an 8 pound yellowtail, which we barbecued with friends from the sailing vessels Stray Cat and Capriccio in Caleta San Juanico. San Juanico is a fairly large bay, with good protection from northerly and southerly winds, but is open to the southeast, which is where the wind has been for the last couple of days, forcing us to shift to a snug anchorage in the lee of some large rocks in the northern reach of the bay. There are dramatic rock formations here, a beautiful freshwater lagoon and a kind of shrine or monument where passing yatistas put up plaques and inscriptions made of anything from old sandals to beautifully carved wood, usually with a boat and crew names and dates. It was interesting to see the names of many boats we’ve come to know hanging in the tree that makes up the shrine.  This passage is the first of the truly homeward bound portion of our voyage. We’ll continue south to Cabo San Lucas, stopping at various places along the way, where we’ll provision and secure the boat for the last long leg of our voyage, the long windward passage up the west coast of Baja to our home port of Long Beach.