Four years ago we sailed the Honcho into the harbor at Cabo San Lucas and discovered that the place was empty. It had been hit hard by the recession in the USA and at the time I estimated that 70 percent of the slips in the harbor were empty. The bars and restaurants that I had frequented in the past were closed or barely hanging on, and the people I talked to bemoaned the bad economy and lack of jobs.

That was then. In the wee hours of Monday, January 20th, 2014 we entered the harbor once again and were presented with an entirely different situation. The place is packed with sportfishermen, day boats, party boats, dinner cruise boats, luxury yachts from around the world and a zillion pangas. I think we got the last available forty foot slip in the harbor. It was heartening to see the town bounce back from what was a devastating recession here. Of course we were not pleased with the prices for a meal around the waterfront were the tourists go, but overall, it's great to see the economy in this part of Mexico rebound.

The last time we were here, a slip for a 35' boat cost about $125.00 per night. This time we put the 42 foot Finisterra in a slip for $79.00 per night. Still not cheap, but acceptable for a couple of nights. There has been quite an uproar recently in the US about a recent crackdown by Mexican authorities on foreign boats that are temporarily in the country. I won't go into the details of it because they are available on 'Lectronic Latitude, but basically, some boats that didn't have all their paperwork in order, and some that did, were impounded by AGACE, Mexico's rough approximation of our IRS, until the paperwork is straightened out or taxes paid. The problem has been with boats that have all the proper documentation but because mistakes on the part of AGACE, and due in part to foreign owners not having all the documents available at the time AGACE inspected their boats, the boats were impounded. I noticed several boats in the marina with "Embargo" notices taped to them, so this is a real and serious issue. Before leaving California and upon checking Finisterra into Mexico, we made very certain that we had all the paperwork and understood the new rules and so as far as I know, we're in good standing with AGACE. In the US, this controversy has already resulted in the cancellation of at least on race to Cabo and I know of several boats that are sitting out this cruising season in California because of the controversy. All the Mexican officials I've spoken to have downplayed the situation, saying the inspections were not well conducted and that AGACE will handle things better in the future.

Enough about embargoes and officials. We've been enjoying wandering around the bustling town, dining on fabulous cuisine in high end restaurants, and equally fabulous meals in smaller places outside the tourist areas.
We checked out the beach and the new cultural pavilion downtown and marveled at the vast number of fish being caught in the local waters. 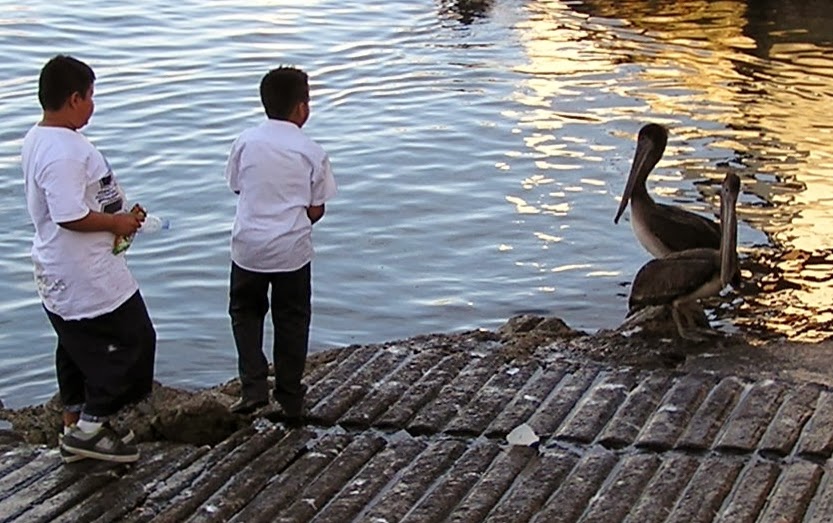 While here I checked all the systems aboard the boat. The only issue we had on the trip south was the refrigeration system. It stopped working in Ensenada, then mysteriously came back from the dead a couple of days later.  It's working now so I'll wait until we get to La Cruz before digging into the system. We also thoroughly washed the boat which had acquired a thick layer of gritty dust in Ensenada, the result of a Santa Ana wind that blew hard the day before we departed.