Finisterra took a berth in Marina Palmira on April 24th where I had planned to do some routine engine maintenance, the most important of which was to service the fuel injectors. Rob from Cross Marine did the injector work and gave the engine a complete inspection while I replaced filters, tightened belts and generally puttered around the engine. In the course of his inspection Rob discovered a slight leak in the raw water pump. Fortunately I had a rebuild kit in my spare parts cache and within a day or two that job was done.


La Paz is the only city on the gulf coast of Baja California. It boasts a population of around 250,000 including nearby suburbs. Mulege, Loreto, and Santa Rosalia are also located on the Sea of Cortez side of the Baja Peninsula, but I categorize them as towns or villages with populations of  4,000, 15,000 and 12,000 respectively.

Because of its location La Paz is the place where cruisers gather before heading up the Sea. Of course there is a fairly large contingent of cruisers who have become more or less permanent residents of this area, some of whom anchor out in the channel between the city and the El Mogote Peninsula, which lies between La Paz and the Sea. Hurricane Odile ravaged the Baja Peninsula last year, passing just to the west of the city and wreaking havoc ashore and among the boats in the anchorage. As we sailed down the channel on our approach to Marina Palmira, we could see evidence of Odile's fury in damaged buildings and torn up docks in the marina. Odile did almost one and a quarter billion dollars worth of damage in Mexico and took over a dozen lives.

One day I helped deliver a boat out to the Tramper, a heavy lift ship that was anchored in the bay. The Tramper was on a voyage delivering yachts from one place to another. After its stop in La Paz, it was headed to Ensenada, then British Columbia. 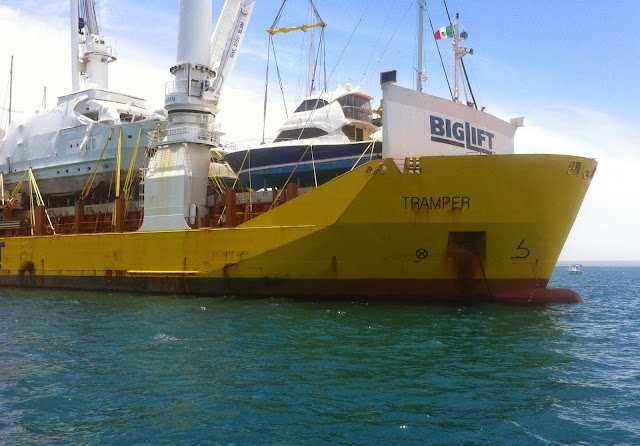 La Paz is usually a hot place this time of year, with average daytime temperatures of 92 degrees under a usually blazing sun. But over the last couple of weeks we've enjoyed temps in the low eighties with cool Coromuel winds blowing almost every night. It's made hiking and exploring the city quite bearable and we've enjoyed the place more than ever. Of course, friends are what really make a place enjoyable and we've spent a good deal of time socializing with great people.

With Finisterra well provisioned, fueled and ready to go, we're heading out tomorrow for the islands to the north of us. The rough plan is to spend a day or two in Puerto Balandra, then a few days in the coves of Islas Espiritu Santo and Partida before heading further north to Isla San Francisco and beyond.