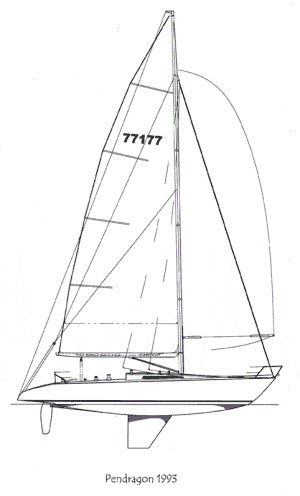 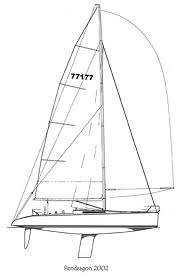 A few days ago an interesting looking boat showed up a few slips down from the Honcho in Paradise Marina. It's all rigged for cruising, with a dodger, dinghy, kayaks, windscoops and lots of the other things that cruising boats carry on deck, but beneath the cruising gear I could see the lines of a grand prix type racer from a bygone era, and a familiar one at that. So I spoke to the guy who was washing it down, and sure enough, it's an old Davidson 44.


Laurie Davidson is a yacht designer from New Zealand who is probably best known for his work with Americas Cup racers, but he has also designed a string of custom racers for individuals. The D-44 was one of his more successful racing boats, but an unlikely design for a cruiser. Imagine converting something like a Maserati Ghibli into an SUV.  The I'o (formerly Shockwave) is a very high performance cruising boat. The folks aboard love it and include in their crew three humans and a pair of german shepherds. Over the last fifteen or so years I've worked on another Davidson 44 called Pendragon. My previous post shows what it looked like back in 1993. I'o looks a lot like that drawing. The 2002 version is the result of our program of continuous modifications and upgrades over a roughly five year period. During that time we changed the bow and stern, added a new keel, rudder and rig including a carbon fiber boom, converted the steering from tiller to wheel, redesigned the deck layout, and many other smaller changes. The owner's most recent changes were to enhance the accommodations below to make it into a comfortable live-aboard boat for two.
The D-44 may not be everyone's first choice for a cruising boat for several reasons. First, it has a tall and powerful sailplan with running backstays and checkstays. This type of rig is requires more of the crew than a shorter, stouter rig would.  Second, the interior is designed for racing with a crew of 12. That means that the bunks are pipe berths, there is no place to stow cruising gear, and cruising comfort was not a significant part of the equation when the boat was built. But the question is whether the D-44 is, or can be made into a good cruising yacht. I would venture to guess that the owners of both boats would say the answer is yes, after they customized the deck, the systems and the interior to meet their needs. Both owners are happily living aboard their boats as well as actively sailing them. Pendragon and I'o are fast boats that perform very well in light air. Speed and light air performance are valuable commodities for cruisers. Both boats are very solidly built and have lots of room below, and the owners of both have made major changes to the interiors to make them suitable for living aboard. Finally, both boats are beautiful. That's important...everyone wants to live in a nice looking house.
Posted by Leif at 8:36 AM