We've had abnormally cold weather here in southern California in the last month so when the forecast changed to unseasonably warm conditions for the next few days we decided to head for Catalina. Departing Long Beach around 11:30 on Sunday, December 15th, we had a light northwesterly breeze for the entire passage.  About mid-channel we broke out the flare gun and fired off some expired rounds for target practice. It's a fun way to get rid of old pyrotechnics and gives the crew a chance to get familiar with them. Though we usually stay at Two Harbors or Emerald Bay, this time we chose Avalon because at this time of year the island is nearly deserted of tourists and it's a perfect time to visit this quaint town.  We picked up a mooring on the west side of the small harbor and got the boat squared away just in time to relax in the cockpit and enjoy a spectacular sunset.

The boat is nearly ready to head for Mexico so the dinghy and liferaft as well as the deck bags are all lashed in place. Over the next few weeks we'll make final preparations and provision for the first leg of the journey south which will take us first to San Diego, then Ensenada, Turtle Bay, Mag Bay, and on to San Jose Del Cabo at the tip of Baja California.

The next day we went ashore early and wandered around town a bit. The atmosphere was more like a country village than the bustling tourist destination it is in the summer. It was a beautiful warm morning and we hiked up to the Botanical Gardens a mile or so behind the town. Our route took us up Avalon Canyon Road and along the way we passed the golf course. I was surprised to see that the horse stables that had stood for years next to the course had been bulldozed. I wonder what they'll replace them with.

By midday we were back in town and played a round of miniature golf before heading back to the boat. I love playing there and we do it every time we're in town. The course is basically a botanical garden with greens. It's a tranquil place with lots of hummingbirds and other flora and fauna...much better than an amusement park setting. Back aboard Finisterra, we relaxed and prepared for another beautiful sunset and moonrise.


The next day we took advantage of free tickets for a Humvee tour into the back country between Avalon and Little Harbor. The tickets were courtesy of the West End Cruising Club which we had joined a year or two back. I was eager to take this tour because it's the only way, besides walking, to see the interior of this end of the island. The Island Conservancy, which manages about 90% of Catalina imposes strict limits on travel in this area. Our route took us up to the airport, which is located on a high point in the middle of the island, then across to Little Harbor and Ben Weston beach, and returned to Avalon via Cape Canyon Road.


By 0800 a cruise ship had anchored off Avalon and the shore boat fleet was busy shuttling tourists ashore so it was a good time to head for the hills, no pun intended. This is a weekly port call for the Carnival Inspiration which also calls at Ensenada and its home port of Long Beach. The ship will depart for Ensenada at 1700 and the town will revert back to quiet village mode until next Tuesday when the ship will arrive again.

After we passed the airport the road turned to rough dirt and gravel so it was a bouncy ride past Rancho Escondido and on down to Little Harbor. The rancho, owned by the Catalina Island Company (the Wrigley family) has been converted from a horse ranch to a vineyard enterprise. They grow chardonnay, zinfandel and pinot noir grapes that are shipped to the Rusack Winery in the Santa Ynez Valley by air. There they are made into fine wines. We missed an opportunity to taste them, but learned that they are available at one of the restaurants in Avalon. We did have a fine meal at another new restaurant in town, the Bluewater, which also has quite a respectable wine list.


From the vineyard of El Rancho Escondido we drove down to a point overlooking Little Harbor. It looks like it's wide open to a southwesterly swell, but there is a protective reef that makes it a reasonably secure place to anchor most of the time. It was deserted on this day, but in the summer there are usually three or four boats anchored bow and stern in this tiny cove.

From Little harbor we turned inland again and drove up Cape Canyon road. We passed the old abandoned coach house which was once a stopover for horse drawn coaches, then we stopped at the eagle sanctuary. Right now there is only a single Bald eagle and a Golden eagle in residence. This is a good thing, since the Bald eagles that live on the island are all healthy. The Bald eagle that lives at the sanctuary was permanently injured several years ago and cannot survive in the wild. The Golden eagle is the last of the breed to live on Catalina. They are not native to the island and now that there is a healthy population of Balds, they are able to keep the Goldens from reestablishing themselves on the island.

From Cape Canyon we drove up the dirt road to Blackjack peak. From there we rejoined the Airport road and returned to Avalon. I'm not a big fan of guided tours, but this one was fascinating. If you like back country touring you'll enjoy this one.

Wednesday dawned cold and blustery and it was time to get back across the channel before a predicted storm arrived, so we dropped the mooring and got shot out of Avalon harbor by a strong wind coming down the canyon. As the day wore on, however, the wind lightened and shifted around to a westerly direction and we had a delightful sail on a close reach back to Long Beach. 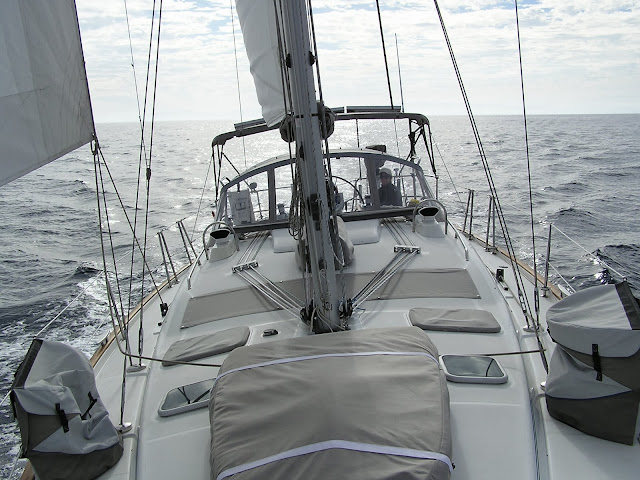