Early last year I saw an article about the acquisition of Hunter Marine by Marlow Yachts. Like many sailboat builders during the Great Recession, Hunter found itself in some financial difficulty and was rescued by a stronger company. Sailboaters may not be familiar with the Marlow brand because it is a powerboat company. They build boats in Asia and market them globally. Marlow Yachts are widely respected and I think they will bring much more than a cash infusion to Hunter. Hunter's aging product line needed an update and I suspect that there was some Marlow influence in the design and production of their first new boat, the Marlow Hunter 40. 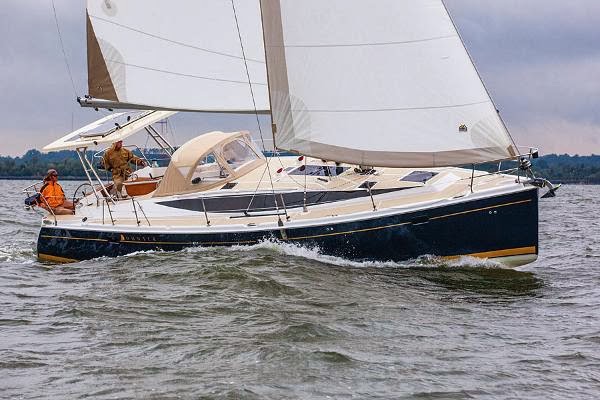 When I first saw the drawings of the MH40, I thought this boat had better be fast because it's not good looking. But a couple of months later I saw one on a mooring in Catalina and must say that the boat is indeed much prettier than the drawings indicate. From a purely aesthetic point of view, it is an exceptionally bold design statement with its powerboat-like hullform and sharply detailed deck. I think this boat blurs the line between power and sail by incorporating powerboat features into a sailboat. Only time will tell if this is the start of a new trend or not.


Beginning with the deck, it's hard to get past the knife-like window design. I think some will like it a lot and others might find it a bit too stylized. The cabin trunk itself is low and sleek, with the cockpit coamings integrated into the roof line. The cockpit is very large with twin wheels, a large dropleaf table amidships and a stainless steel arch that incorporates a bimini and mainsheet traveler. The transom incorporates a large trap door that folds out to make a swim or boarding platform. I'm not a fan of this arrangement and I've been told that Hunter will incorporate step into the transom so boarding from a dinghy won't be quite the challenge that this configuration presents.

Hunter is the only production cruising boat builder I know of that still uses the Bergstrom & Ridder rig. We've all seen Hunter boats with the diagonal shrouds that go both ways (diamond shrouds), and some with deck struts as well to support the rig. Properly done, the B&R rig is set up without a backstay which is how the MH 40 is built. This arrangement allows for a large mainsail but it also puts a lot of compression load on the mast, especially when flying a spinnaker. All of this is fine if the system is well engineered, and the fact that there are hundreds of Hunters sailing with this rig attests to the quality of this arrangement. With all that said, I still prefer a basic two or three spreader rig and a backstay for cruising. The MH40 can be ordered with a classic mainsail, but my guess is that the vast majority of these boats will be set up with a roller furling mainsail. Notice that the traveler is mounted on the bimini. It appears to me that Hunter, like some other sailboat manufacturers is trying to make the sailing of the boat as labor free as possible. I guess that's a good thing for many people but I like to sail, to trim my sails and to get the best out of them. That is certainly possible with this arrangement, but whenever I'm on a boat with the sail controls removed from where I think they ought to be, I feel distant from the actual sailing of the boat.

The hull of the MH40 takes the concept of chines to the point where there is little difference between the aft sections of this hull and those of a powerboat. This certainly makes for a lot of interior space aft and Hunter took full advantage of it to create a beautiful aft stateroom. With a displacement of 19,700 pounds and sail area of 910 square feet, the MH40 sports a D/L of 188 and a SA/D of 20. This is indicative of a moderately heavy boat with a fair amount of sail area.  The keel options include a deep one of 6'-8" draft and a shoal version with 5'-2" draft. The boat should move well in light air and the hard chines will provide a good deal of initial stability as the breeze builds. On the other hand, the hull appears to be quite full in the bow and the chines give it more wetted surface than a more conventional design. I think the MH40 is going to be an excellent boat under power and I would opt for the largest engine they offer. There are more than a few builders these days that are pushing their products in this direction, and it makes sense for boat buyers who love the idea of sailing to their weekend destinations but are constrained by time deadlines. 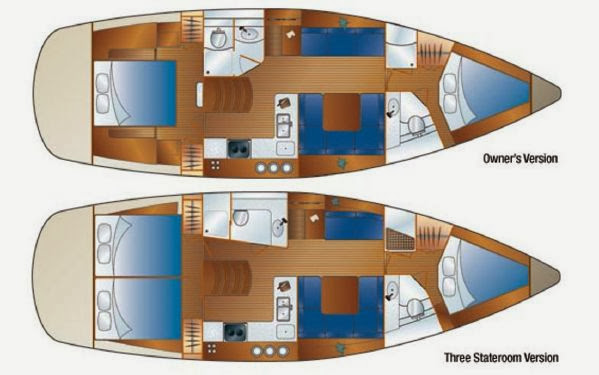 Marlow Hunter offers the 40 in two and three stateroom configurations. You can see how those chines in the hull contribute to expansive accommodations aft. I'm impressed by the size of the aft cabins in both versions, but the single aft stateroom could be described as luxurious. The galley is large and there is adequate seating and living room in the main salon. The forward cabin is snug but adequate and everything is finished with Hunter's usual attention to detail.

Overall, I have to respect the bold styling of the Marlow Hunter 40 and I think there is definitely a market for a good coastal cruising sailboat that can provide reasonable sailing performance as well as a good turn of speed under power. These days people have precious little time for relaxing at their favorite cruising spot and the MH40 may be just the right combination for today's busy cruising family. It's good to see the Hunter name survive and I wish them all success with their new line of boats.