Road Trip: The butterflies of Morelia

After three days in the fascinating city of Guanajuato it was time to reluctantly say goodbye and get back on the road. Our first stop was San Miguel de Allende. This town is renowned for its arts and culture, and is home to two prestigious schools, the Instituto Allende and the Instituto de Bellas Artes. These schools, founded in the 1940's by artists and writers, attracted American WWII veterans who could attend classes on the GI Bill. Many of them stayed in town or later retired there, and soon the town had a large and vibrant American community. But San Miguel also has a rich history dating back to the days when Mexico was fighting for independence from Spain and it is known as the first city to throw off Spanish rule.

Unfortunately we had time only for a quick tour of downtown and an hour or so for lunch. We wandered around the central plaza and admired the architecture of the buildings and the diversity of the tourists that crowded the area. The church is one of the most beautiful we've encountered and I couldn't help being impressed by it. 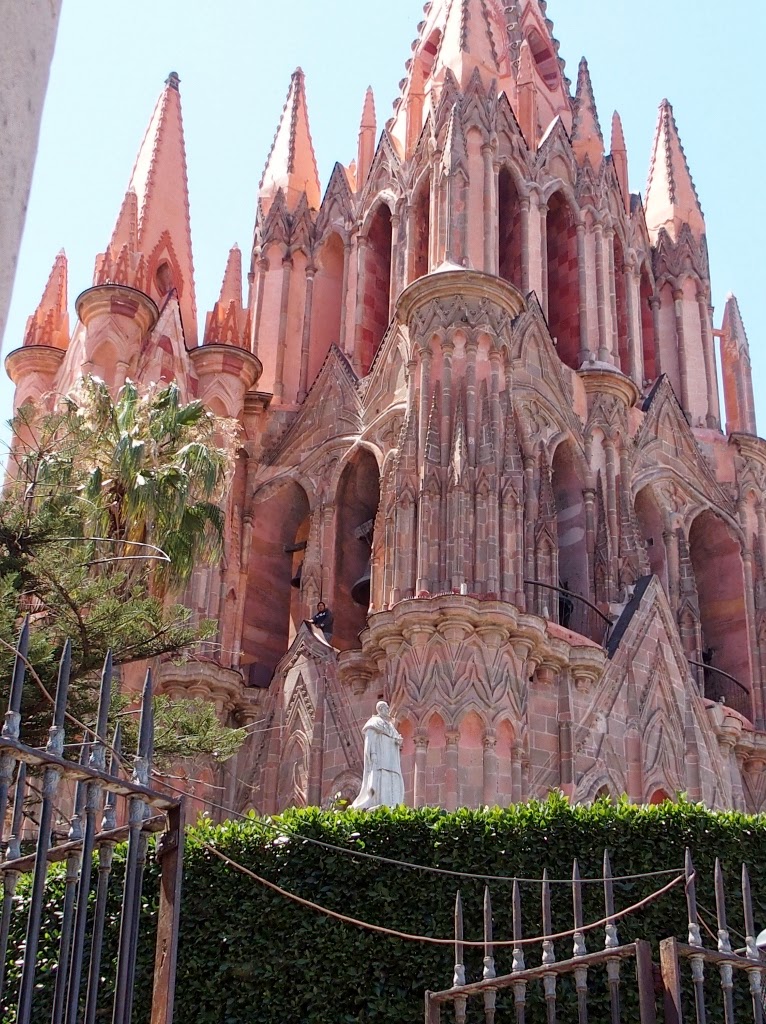 After a couple of hours in San Miguel it was time to continue on to Morelia. Rolling down the highway we passed through rich farmland and crossed into the state of Michoacan, home of the notorious Knights Templar drug cartel. Here the conflicts between the cartels, the locals and the government are real, and we saw more than a few heavily armed soldiers and police manning checkpoints and driving around in big trucks. I know very little about this complicated situation but one aspect of it is that in some towns in the region, local citizens have taken up arms against the "Templars" that have terrorized and extorted money from them. Anyway we were careful about where we were at all times and were tucked into our hotel well before dark whenever possible.

We really didn't do much in Morelia. We had come to see the Monarch butterflies, but it turns out that they don't actually hang out in Morelia, but in the mountains about 80 tortuous miles east of the city. So we got up early and drove out through mountains and high valleys toward the town of Angangueo. From there it was another ten or fifteen miles up a steep mountain road that ended at a small settlement that marked the entrance to the Monarch Butterfly Sanctuary, which was at roughly 10,000 feet elevation. We parked in a deserted parking lot and hiked up to the entrance of the sanctuary. The entry fee was about 35 pesos per person, which included a guide. As we hiked up the trail, which consisted of a nice footpath and in some areas staircases, he told us about the butterflies and their migrations.

The countryside is a beautiful forest of spruce and pine and it was a nice walk up to an elevation of about 11,000 feet. The guide told us that the path to the top included 700 stairs. We knew we had arrived late in the season so we expected to see a few butterflies and then head back down the road. Sure enough on the way up we encountered a few and thought they were beautiful. We told the guide they were nice and said he didn't have to walk all the way to the top with us. But he encouraged us to go on. I was a little concerned for our companions, Ed and Connie, they are both a bit older and not accustomed to hiking. But they were game and we continued on up to a small pass where we encountered some horsemen who offered their horses to us, which we declined. 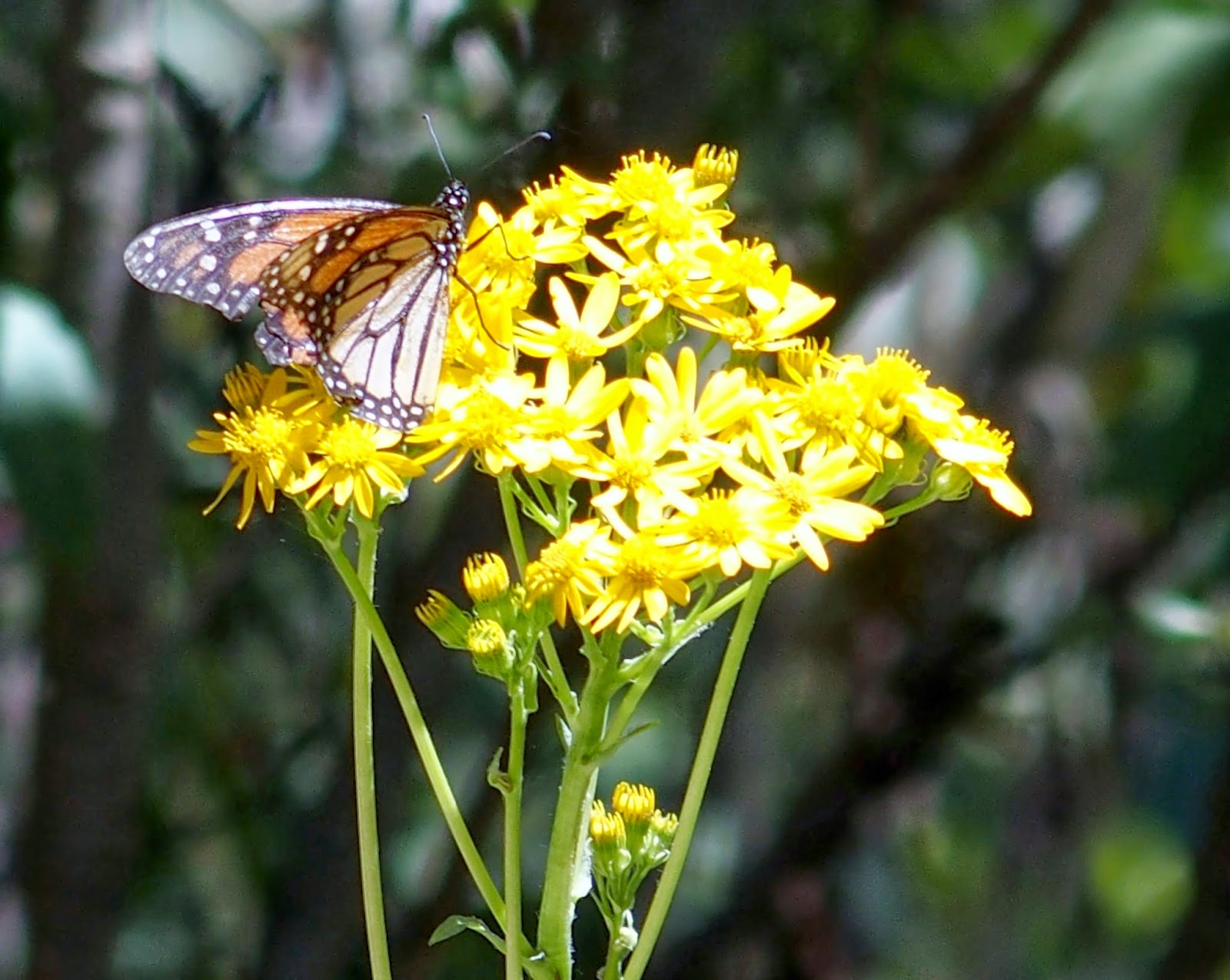 As we headed down the trail on the other side of the pass, the forest canopy closed in and the guide dropped his voice to a whisper. We walked on in silence, deeper into the forest. Then we arrived in the heart of the sanctuary and found ourselves surrounded by millions of Monarchs. They flew all around us, landing on us, posing on flowers and clustering by the thousands on branches above us. It was at once magical and awe inspiring to stand in silence and hear the sound of thousands of butterfly wings. We spent an hour or so with them, then it was time to go. 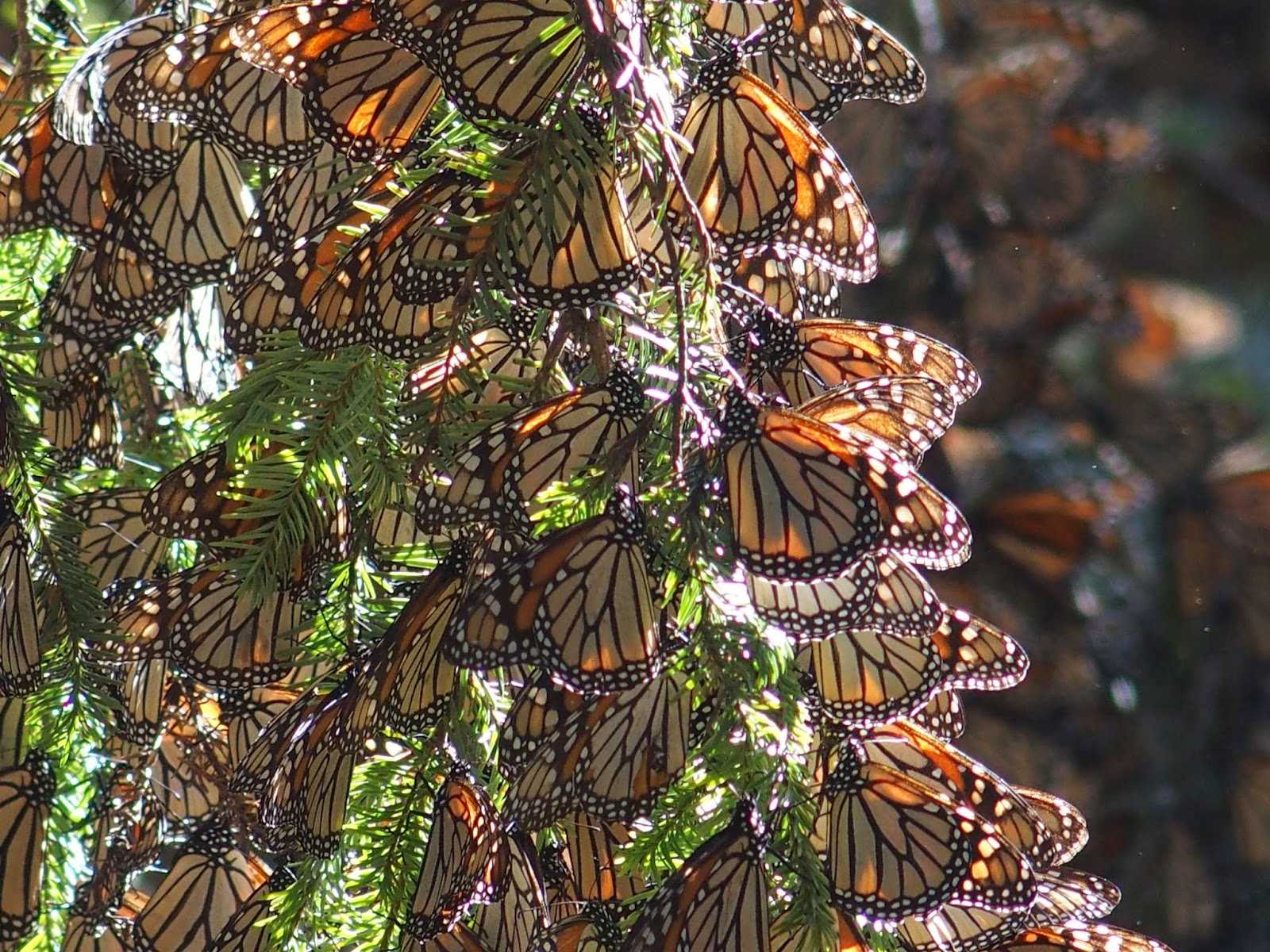 We hiked back up the trail to the pass where the horsemen had patiently waited. Ed and Connie decided they'd had enough walking and accepted the offer of a couple of horses while Lisa and I accompanied the guide back down the trail. Soon we were back in the car and headed for our hotel in Morelia, we arrived in the early evening tired but still enchanted by the butterflies. It was a perfectly beautiful experience. The next day we got an early start toward the troubled city of Patzcuaro, where local vigilantes had recently taken their town back from the Templars.