The Honcho was in the Mazatlan area for about three weeks, and while it is a beautiful city, we were ready to leave. I really enjoyed the old town and the crisp weather there, but the marina had a different atmosphere from La Cruz. It is older and quieter, with less to do that is within walking distance than Marina La Cruz. The murky, slimy water in this marina was by far the worst we’ve experienced and we were certainly ready for someplace new, preferably a place with warm, clear water, beach palapas, and a view.  So at 1800 on Saturday afternoon, April 16th, we checked out of the marina and, motoring against a three knot current, headed out of the harbor toward a little place called Ensenada de los Muertos, on the southeastern coast of Baja California. 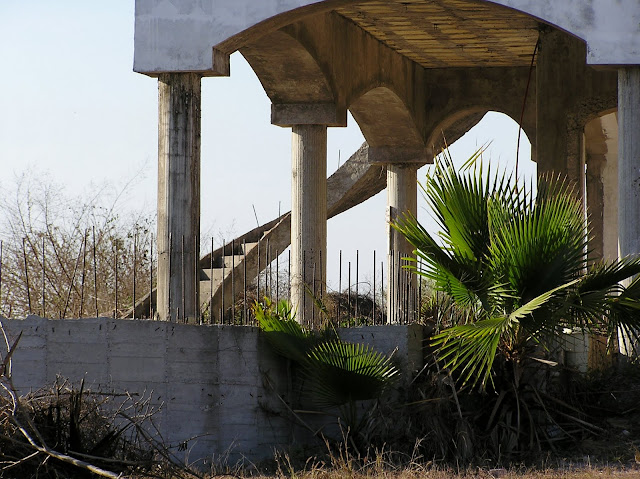 Looking back toward the pretty Mazatlan skyline, it was a bittersweet feeling to know that our time on mainland Mexico is over.  With scant wind, we motored westward into the setting sun, looking forward to an easy 190 mile passage to the Bay of the Dead. Just after sunset, a full moon rose over the eastern horizon, giving us a glorious night of sailing. Our course took us slightly north of west, and at 2230 we crossed 23 degrees, 26.25 minutes north latitude, which is the Tropic of Cancer, taking us out of the tropics and into the sub tropic zone.

When the sun rose the following morning we were forty miles offshore and the sea had turned from a murky green to a deep clear blue.  By 0900, a warm southerly breeze came up and we spent the rest of the day on a beautiful beam reach in 10-15 knots of wind.  We started trolling with a Mexican lure on 40 pound test line around 1000 in hopes of finally catching a dorado, but after three hours without a bite, I had forgotten that it was there.  Suddenly the reel lit up and I could tell by the way the line was zinging off the reel, we’d hooked something big.  I grabbed the rod and tried to reel it in, but got nothing. Then I saw why as a 5-6 foot marlin launched out of the water on our starboard beam.  There is no way we could handle a fish like that on the Honcho so I reached for the pliers to cut the line. By this time the fish had reversed course and once again launched out of the water a hundred feet off our transom. I managed to cut the line before he took all of it off the reel. The entire episode happened in the span of about ninety seconds. We were thrilled by the sight of such a fish, but glad to let the big fella go.
By nightfall, we were about forty miles from Bahia de los Muertos, still with a fine southerly breeze. We were greeted by another full moon in a cloudless sky just after the sun sank below the horizon. We had Polaris and the Big Dipper on our starboard beam, but the Southern Cross was no longer visible, being now well below the southern horizon.  It was interesting to see that the sea temperature rose from around 62 to 71 degrees as we sailed out of the Pacific Ocean and into the Sea of Cortez.
Around 2200, the wind dropped to almost nothing and we began motoring the last twenty miles toward Bahia de los Muertos.  At 0300 we slowly crept into the anchorage and dropped the hook.  The white sand beach and low hills surrounding the north and west sides of the bay were beautiful in the moonlight. We’re finally in the Sea of Cortez.
Posted by Leif at 9:00 AM